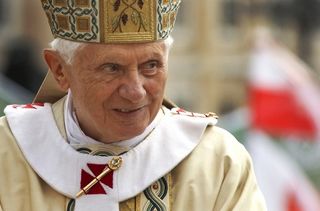 The election a new pope will shape church views on science in the coming years.
(Image: © Jeffrey Bruno | Shutterstock.com)

Science and the Catholic Church share a long and sometimes tumultuous history. As the church leaders gather for the start of conclave Tuesday (Mar. 12), their choice of a new holy leader will affect Catholic views on science in the coming decades, say scientists.

The Catholic Church has come a long way from its inauspicious treatment of Galileo Galilei in the 17th century. It now recognizes a theistic form of both cosmic and biological evolution. But the church remains steadfastly opposed to contraception, abortion and research using human embryonic stem cells.

"The natural sciences are in a steady search for truth, and so is theology," retired molecular geneticist and Nobel laureate Werner Arber told LiveScience. Arber is president of the Pontifical Academy of Sciences, a scientific group associated with the church that was founded in 1603 and re-founded by the Vatican in 1936.

On Feb. 28, Pope Benedict XVI resigned from office, the first time a pope has stepped down in six centuries. His successor will set the tone for the church's views on science, as in other matters. [Papal Primer: History's 10 Most Intriguing Popes]

"I do hope that this new pope [will recognize] things like equality between men and women. This would absolutely be justified from a science point of view," said Arber.

Here's a look at the Vatican's views on science over the years:

The Catholic Church has been called by some the largest single and longest-term patron of science in history. Indeed, the church funds many of the world's hospitals and medical facilities. Yet science and the church have a somewhat checkered history.

In the early 1600s, a certain Italian astronomer came into conflict with the Catholic Church over his support of the Copernican view that the Earth revolves around the sun. Galileo, himself a Catholic, was tried for heresy in 1633 by the Roman Inquisition, which forced him to recant his views and live out his days under house arrest. It wasn't until 2000 that former pope John Paul II issued a formal apology for the church's treatment of Galileo.

The church's views on evolution have themselves evolved over the years. For the first hundred years or so after Charles Darwin first put forth his theory, the church took no formal stance on evolution, though some church figures rejected it. As late as the 1950s, the church maintained a neutral position on the subject, but by the end of the 20th century the Catholic Church showed general acceptance of 'theistic evolution,' which states that God created a universe where cosmic and biological evolution occurred.

"The theory has been progressively accepted by researchers, following a series of discoveries in various fields of knowledge," former pope John Paul II said in a speech to the Pontifical Academy of Sciences at the Vatican in October 1996. [The Top 10 Intelligent Designs (or Creation Myths)]

When it comes to reproductive issues like contraception and abortion, the Vatican has taken a consistently conservative stance. In 1968, Pope Paul VI formally rejected the use of contraception, including sterilization, in his encyclical "Humanae Vitae" (On Human Life). "An act of mutual love which impairs the capacity to transmit life which God the Creator, through specific laws, has built into it, frustrates His design," the pope wrote.

To combat the scourge of HIV/AIDS, the church advocates monogamy and abstinence before marriage over the use of condoms. The church has been a world leader in providing care for victims of HIV/AIDS, but Pope Benedict XVI drew fire from health experts in 2009 when, while on a trip to Africa, he stated that condoms would worsen the AIDS epidemic.

"You can't resolve it with the distribution of condoms," the pope said of the AIDS crisis. "On the contrary, it increases the problem."

In recent years, the church has taken issue with research using human stem cells, which have the ability to develop into different tissue types, making them promising for disease therapies. The church has mainly confined its opposition to the use of embryonic stem cells because of the Catholic view that life begins at conception.

''Scientific research must be encouraged and promoted, so long as it does not harm other human beings, whose dignity is inviolable from the very first stages of existence,'' Pope Benedict XVI said in June 2007, the New York Times reported.

The Pontifical Academy of Sciences held a workshop on stem cell research in 2012. The event focused on the potential of induced pluripotent stem cells, which have the ability to develop into different cell types, but don't have to come from embryos.

The workshop is a good example of how the Vatican is willing to listen to scientists, said Arber (president of the academy).