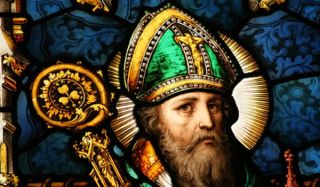 Saint Patrick's Day, the festival of green beer and shamrocks and the most well-known Irish holiday celebrates a saint who wasn't named Patrick and wasn't even Irish. In fact, he was held as a slave in Ireland before becoming a well-respected priest .

The patron saint of Ireland, Saint Patrick is actually said to have been born in either Scotland or Wales during 386 A.D. Historians believe that he was born to a wealthy family and originally named Maewyn Succat. At the age of 16, Saint Patrick was kidnapped by Irish raiders, sold into slavery and forced to work as a shepherd.

After six years of captivity, Saint Patrick escaped and returned home, but was drawn back to Ireland after he had a vision in which the Irish people said "We beg you, holy youth, that you shall come and shall walk again among us," according to one of Saint Patrick's letters.

Once he was back in Ireland, Saint Patrick became a missionary and helped to teach the Christian religion to the Druids, or Celtic people who worshiped ancient Pagan gods . As a priest, he took on the name Patricius, which means "father of the citizens" in Latin, which later evolved into Patrick.