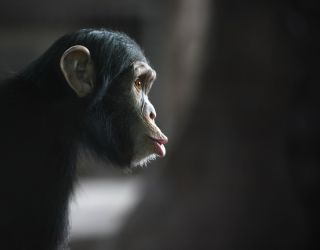 If you've seen the movie "Psycho," you probably cringe in anticipation while rewatching the famous scene where actress Janet Leigh steps into the shower. Now, scientists have found that great apes may also remember and anticipate memorable on-screen events as well.

Many scientists have tried to piece together how memories work in animals, especially chimpanzees and other apes. One common test, for example, is to see if animals can watch and remember where someone else hid some food. In a new study, scientists from Kyoto University in Japan wanted to examine whether a group of chimpanzees and bonobos (a close chimp relative) could not only remember past events, but also anticipate what would happen next.

To test this idea, the scientists turned to the silver screen. "We really wanted to make [the apes] remember a novel event," said study co-author Fumihiro Kano, a comparative psychologist at Kyoto University. [See video of how scientists evaluated apes' memory and anticipation]

In other words, the scientists wanted to try something more interesting than just hiding food under a rock. The researchers showed the apes two short, homemade films. In the first film, a man in a King Kong suit suddenly bursts out of one of two doors and attacks a nearby human. In the second film, the movie monster strikes again, but this time, the human is able to snatch up a nearby weapon to fight back.

The scientists showed each movie to the apes twice, and in both screenings, the researchers used eye-tracking technology to watch exactly where the animals were looking. "Their eye movement can tell [us] a lot of things," Kano told Live Science.

For example, the scientists discovered that when the apes were rewatching the movies, they spent significantly more time staring at the fateful, monster-hiding door, even looking there before the monster appeared. It was as if they were expecting the monster to appear again, the researchers said.

This supports the idea that the apes could remember events and anticipate what would happen next. According to the scientists, this kind of memory could help the animals survive dangerous situations and navigate social structures in the wild.

This research was made possible largely due to advances in eye-tracking technology, the researchers said. In the past, these types of experiments required attaching bulky or uncomfortable equipment to the test subject, but scientists "cannot really implant or attach cords on apes' eyes," Kano said. Now, however, it can be done with just a small, monitor-like device placed near an animal's face. "So, [it's] thanks to this state-of-the-art eye-tracking technique that we can explore this old question in a very innovative way," he added.

This kind of episodic, anticipatory thinking can be very difficult to assess in animals, but there is mounting evidence that it does, in fact, occur, said Gema Martin-Ordas, a researcher at Newcastle University in the United Kingdom. She also studies animal intelligence but was not involved with the new findings.

"One of the most common 'mistakes' is to conclude that since we can't empirically and objectively demonstrate the subjective components, then nonhuman animals might be stuck in time and might not be [able] to remember or imagine future events the same way as humans do," Martin-Ordas told Live Science.

It's important for scientists to further investigate how this type of memory and anticipation may be similar or different for animals across various species, she added.

The apes used in the new study came from the Kumamoto Sanctuary in Japan. Some animals had to be excluded from the testing for technical reasons, and a larger sample size would make the findings more convincing. However, Kano said 12 animals is a reasonable size for such a study, especially given how difficult it can be to gather rare animals such as chimpanzees and bonobos.

The detailed findings were published online today (Sept. 17) in the journal Current Biology.