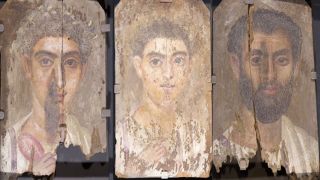 Egyptian mummy portraits from the second century show no apparent blue in visible light, but do indeed have Egyptian blue pigment, according to scientific analyses.
(Image: © Phoebe A. Hearst Museum of Anthropology, University of California, Berkeley)

Researchers previously thought that ancient painters reserved Egyptian blue for eminent occasions because, as the first man-made blue pigment, it took effort to make it. But in an analysis of 15 paintings, scientists found five contained the pigment.

Intriguingly, the blue pigment was used for preliminary sketches and color modulation, meaning it was hidden beneath other colors used later during the painting process. [Research as Art: A Gallery of Scientific Beauty]

"This defies our expectations for how Egyptian blue would be used," study co-author Marc Walton, a research associate professor of materials science and engineering at Northwestern University in Illinois and an expert on the color blue, said in a statement. "The discovery changes our understanding of how this particular pigment was used by artists in the second century A.D. I suspect we will start to find unusual uses of this colorant in a lot of different works of art, such as wall paintings and sculpture."

Researchers uncovered the paintings in 1899 and 1900 during excavations at the archaeological site of Tebtunis (modern-day Umm el-Breigat), located about 92 miles (148 kilometers) southwest of Cairo.

Today, the paintings are housed at the University of California, Berkeley, and comprise one of the largest groupings of Roman Egyptian mummy portraits and paintings to survive intact since their excavation, the researchers wrote in the study. The research was published online Aug. 14 in the journal Applied Physics A.

Based on the artistic style, researchers dated all of the portraits to the second century, when Roman Egyptians painted portraits of the dead on wood panels, and tied this artwork to the deceased's face during mummification.

During that time, Roman-period painters tried to emulate Greek painters, who were considered masters of the art world. Before the Greek era, painters used the lapis-inspired Egyptian blue throughout the Mediterranean, including on frescoes, temples, pottery and Egyptian funerary masks. But the Greeks tended to avoid blue pigments, instead relying almost exclusively on yellow, white, black and red.

"When you look at the Tebtunis portraits we studied, that's all you see, those four colors," Walton said. "But when we started doing our analysis, all of a sudden we started to see strange occurrences of this blue pigment, which luminesces. We concluded that although the painters were trying hard not to show they were using this color, they were definitely using blue."

In the study, the researchers studied 11 mummy portraits and four painting fragments from Tebtunis. The investigators examined the artwork with a routine battery of tools, such as X-ray fluorescence (a method that bombards material with high-energy X-rays and examines the type of fluorescent X-rays emitted), X-ray diffraction (a technique that identifies crystalline material) and a scanning electron microscope (an instrument that gives a magnified view of paint particles).

The analyses showed that four portraits and one panel had unusual amounts of Egyptian blue, the researchers found. [In Photos: Ancient Egyptian Coffin with 'Odd' Art]

"Our findings confirm the distinction between the visual and physical natures of artifacts — expect the unexpected when you begin to analyze an artwork," said study co-author Jane Williams, a conservator at Phoebe A. Hearst Museum of Anthropology at UC Berkeley. "We see how these artists manipulated a small palette of pigments, including this unusual use of Egyptian blue, to create a much broader spectrum of hues."

The ancient painters used blue for preliminary sketches, to modify white pigment on clothing and on gray backgrounds, the researchers found.

"We are speculating that the blue has a shiny quality to it, that it glistens a little when the light hits the pigment in certain ways," Walton said. "The artists could be exploiting these other properties of the blue color that might not necessarily be intuitive to us at first glance."

It's surprising that artists used Egyptian blue for sketches, especially because drawing drafts could be made with cheaper pigments, such as carbon black (a black pigment) or chalk, the researchers said.

"The use of Egyptian blue as under-drawing [preliminary sketch] pigment introduces questions about the wide availability of Egyptian blue during the Roman period, suggesting it was so abundant that it could be a substitute for carbon black or chalk," the researchers wrote.