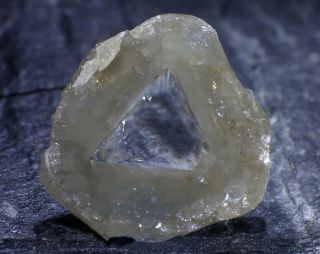 A diamond with a gem-quality core and a coating that contains tiny fluid inclusions from deep beneath Earth.
(Image: © Anetta Banas)

Diamonds can form with the help of ancient saltwater, say researchers who have identified the gems that crystallized with the help of oceanic crust dating back as far as 200 million years ago.

This finding could help solve the long-standing mystery of how diamonds form, and shed light on how matter gets cycled between the surface and the deep Earth, scientists added.

Diamonds crystallize under extraordinary heat and pressure. Scientists think the jewels usually form 90 to 150 miles (140 to 250 kilometers) below Earth's surface, in the planet's mantle layer, which is sandwiched between Earth's crust and core. The deepest of these precious stones have come from 430 miles (700 km) below Earth's surface.

Powerful volcanic eruptions can punch through the centers of ancient continents to bring diamonds to Earth's surface, embedding the crystals in rocks known as kimberlites that can be up to 2.1 billion years in age. Formations of Kimberlite are often barren of diamonds; of the 1,500 or 2,000 known kimberlites, miners have found only 50 or 60 that are worth mining. [Sinister Sparkle Gallery: 13 Mysterious & Cursed Gemstones]

Most scientists think diamonds crystallize from some kind of fluid. However, what exactly that fluid might be is controversial.

To help solve this mystery, geochemists analyzed precious stones from the Ekati Diamond Mine in the tundra of Canada's Northwest Territories, the source of Canada's first commercial diamonds. These kimberlites are relatively young, having formed as recently as 45 million years ago.

The diamonds most useful to geochemists are the least commercially viable ones: flawed, dirty-looking diamonds loaded with impurities such as bits of rock and tiny droplets of fluid. These impurities, known as inclusions, lower a stone's commercial value, but can hold secrets about how the gem formed.

"After a diamond captures something, from that moment until millions of years later in my lab, that material stays the same," study lead author Yaakov Weiss, a geochemist at Columbia University's Lamont-Doherty Earth Observatory in the Palisades, New York, said in a statement. "We can look at diamonds as time capsules, as messengers from a place we have no other way of seeing."

The scientists analyzed fluid inclusions within 11 fibrous diamonds — stones that consist of multiple layers instead of a single gem-quality crystal. These droplets were salty, loaded with plenty of chlorine, potassium and sodium, much like seawater.

By pinpointing when the diamonds formed and the composition of their inclusions, the researchers were able to suggest the fluids' origin: a slab of watery oceanic crust that plunged or subducted below western North America about 150 million to 200 million years ago. This occurred underneath what is now the present-day Canadian tundra, where the mines are located. This finding "provides strong evidence tying ancient surface water with diamond formation at depths of 150 to 200 km (93 to 124 miles) below continents," Weiss told Live Science. [In Photos: Ocean Hidden Beneath Earth's Surface]

The scientists do not suggest that diamonds form directly from seawater. Instead, the researchers say fluids from the oceanic crust chemically reacted with solid continental rocks just above them, helping create the right mixture from which diamonds could crystallize, Weiss said.

Understanding diamond formation could shed light on the carbon cycle, the movement of vast amounts of carbon from the Earth's atmosphere and surface into the planet's interior, through activity such as subduction, and then back up again through volcanic eruptions. This cycle plays a key role in controlling climate; for instance, carbon dioxide traps heat from the sun to warm the globe.

It remains uncertain whether all diamonds crystallize with the help of seawater. "Many scientists now believe that both dirty diamonds and gem-quality diamonds form from the same fluids, but this topic is still arguable," Weiss said. "Personally, I am among those that think that most diamonds form in a similar way."

It is also an open question whether this research could help miners find new veins of diamond ore. "If a direct connection between kimberlite eruptions and oceanic subduction can be demonstrated, then it might be wise to look for kimberlites along ancient subduction lines," Weiss said.

The scientists detailed their findings in the Aug. 20 issue of the journal Nature.