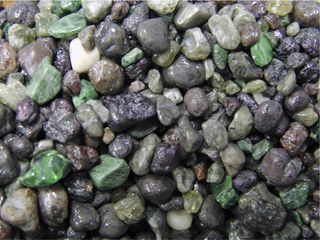 Diamond indicator mineral grains recovered during mining of Canadian kimberlite; minerals are sourced from the deep mantle and are rapidly transported to the Earth's surface by kimberlite magma.
(Image: © Lucy Porritt)

Diamond-laden magmas apparently rapidly rise from deep within the Earth to the planet's surface by jettisoning weight, scientists now find.

Magmas known as kimberlites have the deepest origins of all magmas on Earth. Although kimberlites are dense in crystals — sometimes holding diamonds — they nevertheless rise upward fairly rapidly.

To solve the mystery of the speedy ascent of these dense, crystal-rich magmas, researchers carried out a series of high-temperature experiments. This involved melting powders matching the minerals that they suspected gave rise to kimberlites at temperatures of up to 2,000 degrees Fahrenheit (1,100 degrees Celsius).

Their work suggests that the minerals that give rise to kimberlites are originally laden with dissolved compounds such as carbon dioxide. However, these magmas then take on silica-loaded minerals in the mantle that reduce how well they hang on to the carbon dioxide, forcing it out. This reduces the magma's density, resulting in kimberlites that are buoyant enough for rapid ascent.

"The most surprising thing about these results is how rapidly and vigorously the reactions took place," said researcher Kelly Russell, a volcanologist at the University of British Columbia in Vancouver.

Russell and his colleagues Lucy Porritt, Yan Lavallée and Donald Dingwell detailed their findings in the Jan. 19 issue of the journal Nature.