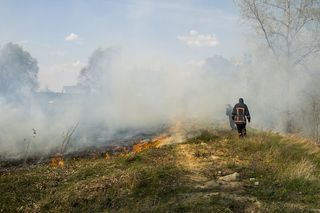 Recent wildfires in Northern California have consumed tens of thousands of acres in the past several weeks. In a paradoxical twist, some of the farms set ablaze in the recent conflagrations were marijuana farms, which produce plants that are meant to be burned (though not quite like this).

News reports about the burning pot plants have focused on the effects the ignited plants might have on the state's medical marijuana industry. But what about other side effects caused by the burning plants? Namely, are the burning pot farms going to get anybody high?

"Unfortunately, no. Or fortunately, no, depending on your perspective," said Ryan Vandrey, an associate professor in the Department of Psychiatry and Behavioral Sciences at Johns Hopkins University in Baltimore. It's very unlikely that nonsmoking Californians will suddenly get the munchies or experience any of the other reported effects of the intoxicating plant, Vandrey told Live Science. [11 Odd Facts About Marijuana]

It's not that marijuana smoke can't get you high. It can, according to a study that Vandrey and his colleagues published in May in the journal Drug and Alcohol Dependence. The study found that tetrahydrocannabinol (THC) from secondhand pot smoke can build up in a nonsmoker's body, enough so to make him or her feel intoxicated, and in some cases, enough so that he or she would even fail a drug test. (THC is one of the chemicals in marijuana that bonds with cannabinoid receptors in parts of the brain associated with things like pleasure, coordination, memory and time perception. Scientists think THC is likely the chemical behind the "high" people feel when they smoke weed.)

But in order for the THC in secondhand pot smoke to get you high, you'd need to breathe in an awful lot of it, said Vandrey, who noted that this kind of hand-me-down high only occurs when non-pot smokers are stuck in a "hot box" situation (i.e., a room with no windows or any other source of ventilation).

"We evaluated the conditions under which you'd need to be to get intoxicated from secondhand smoke exposure, and it needs to be very extreme," Vandrey told Live Science. In the study, the researchers put 12 participants in a small, Plexiglas chamber and gave half of them joints (marijuana cigarettes) to smoke. Even when a regular air conditioner was set up in the enclosure, enough smoke from the room filtered out so that the nonsmokers stuck in the "hot box" didn't experience a buzz, Vandrey said.

Outside, where there is a constant circulation of air, it's hard to imagine that a person could breathe in enough marijuana smoke to feel the effects of the drug, said Vandrey, who added that a person would have to stand at the edge of a burning field of marijuana and gulp in the smoke for it to have any effect.

And guess what? Standing at the edge of a burning marijuana field, gulping up smoke, is a very, very bad idea, according to Vandrey, as well as the American Lung Association, which recommends that people exposed to wildfire smoke, even from afar, should filter the smoke with a mask and, if possible, stay indoors, away from potentially harmful clouds of soot and ash.