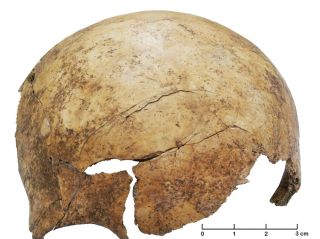 A cranial injury on the frontal bone of a roughly 8-year-old child.
(Image: © Courtesy of Christian Meyer)

A 7,000-year-old mass grave holding at least 26 adults and children, many of them with smashed skulls and broken legs, is likely evidence of an early Neolithic massacre, a new study finds.

Most of the cranial bones show signs of blunt-force trauma, the researchers said. A number of individuals also had broken leg bones (tibiae and fibulae), indicating they were tortured before death, or mutilated afterward, said the study's lead researcher, Christian Meyer, a bioarchaeologist who conducted the study while at the University of Mainz in Germany.

The researchers also found two bone arrowheads in the grave, weapons that were likely used against the victims, Meyer said. [Photos: Hundreds of Medieval Bodies Found in Paris Mass Grave]

The grave is the latest grisly finding that suggests the early Neolithic period was a violent time in central Europe. Researchers have uncovered two other mass graves — a "death pit" with 34 bodies in Talheim, Germany, and the remains of at least 67 individuals at Asparn/Schletz, Austria — that are dated to the early Neolithic period in central Europe, between 5600 B.C. and 4900 B.C. years ago. All three graves are linked to the Linearbandkeramik (LBK) culture, a group named for the linear ornaments on their pottery. The LBK originally came from the Middle East, and brought sheep, goats and other domesticated animals with them as they began setting up farms and small villages in central Europe.

"We have these three massacres now from roughly the same time period, from different areas within the Linearbandkeramik world, so we know this period of time was quite violent, actually," Meyer told Live Science.

Researchers discovered the rectangular grave in Germany in 2006, during a road construction project at Schöneck-Kilianstädten, a site about 12 miles (20 kilometers) northeast of Frankfurt.

Archaeologists immediately suspected that the ancient grave — measuring about 25 feet by 3.3 feet (7.5 meters by 1 meter) — held massacre victims. Typically, early Neolithic burials hold one body per grave, and about 50 percent of them contain goods such as pottery, stone tools or ornaments made of shells, Meyer said.

However, the people in the mass grave show signs of severe injuries, and the mass grave itself doesn't contain any grave goods. Nor does it show any sign of care or ritual given to the bodies before they were buried. This evidence supports the idea that the grave holds massacre victims, he said.

The ages and genders of the bodies are also intriguing. An analysis of the battered bones suggests 13 individuals were children, 10 of them younger than 6 years old at the time of death. The youngest was likely just 6 months old, Meyer said.

Victims ages 9 to 15 are curiously absent from the grave. The other 13 individuals are adults, but only two of them are likely women, he said.

It's possible the group didn't have many teenagers or women, "but we have a lot of children there, so there must have been a lot of women around," Meyer said.

Perhaps the attackers — possibly from another LBK settlement — kidnapped the young women and forced them into their community, he said. It's also possible that the teenagers, likely the most agile members of the group, fled to escape the attackers. [The 7 Most Mysterious Archaeological Finds on Earth]

The study contributes to the idea that the early Neolithic was a fairly violent period of time, said Mark Golitko, a research scientist of anthropological archaeology the Field Museum in Chicago, who was not involved in the study.

"It's not an isolated example of violence from this particular time period; it's part of a general pattern that we're beginning to see," Golitko said. "It looks like the population of an entire village was wiped out."

The study was published online today (Aug. 17) in the journal Proceedings of the National Academy of Sciences.