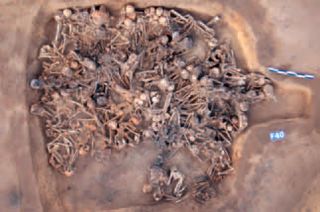 The 5,000-year-old house found in China was about 14 by 15 feet in size.
(Image: © Photo courtesy Chinese Archaeology)

The remains of 97 human bodies have been found stuffed into a small 5,000-year-old house in a prehistoric village in northeast China, researchers report in two separate studies.

The bodies of juveniles, young adults and middle-age adults were packed together in the house — smaller than a modern-day squash court — before it burnt down. Anthropologists who studied the remains say a "prehistoric disaster," possibly an epidemic of some sort, killed these people.

The site, whose modern-day name is "Hamin Mangha," dates back to a time before writing was used in the area, when people lived in relatively small settlements, growing crops and hunting for food. The village contains the remains of pottery, grinding instruments, arrows and spearheads, providing information on their way of life. [In Photos: Remains of 'End of World' Epidemic Found in Ancient Egypt]

"Hamin Mangha site is the largest and best-preserved prehistoric settlement site found to date in northeast China," a team of archaeologists wrote in a translated report published in the most recent edition of the journal Chinese Archaeology (the original report appeared in Chinese in the journal Kaogu). In one field season, between April and November 2011, the researchers found the foundations of 29 houses, most of which are simple one-room structures containing a hearth and doorway.

The house with the bodies, dubbed "F40," was just 210 square feet (about 20 square meters). "On the floor, numerous human skeletons are disorderly scattered," the archaeologists wrote.

Photos taken by the archaeologists convey the prehistoric scene better than words do. "The skeletons in the northwest are relatively complete, while those in the east often [have] only skulls, with limb bones scarcely remaining," the archaeologists wrote. "But in the south, limb bones were discovered in a mess, forming two or three layers."

At some point the structure burnt down. The fire likely caused wooden beams of the roof to collapse, leaving parts of skulls and limb bones not only charred but also deformed in some way, the archaeologists wrote.

The remains were never buried and were left behind for archaeologists to discover 5,000 years later.

An anthropological team at Jilin University in China is studying the prehistoric remains, trying to determine what happened to these people. The team has published a second study, in Chinese, in the Jilin University Journal – Social Sciences edition, on their finds. (A brief English-language summary of their results is available on the American Association of Physical Anthropologists website.)

The Jilin team found that the people in that house died as the result of a "prehistoric disaster" that resulted in dead bodies being stuffed into the house.

The dead came in faster than they could be buried. "The human bone accumulation in F40 was formed because ancient humans put remains into the house successively and stacked centrally," wrote team leaders Ya Wei Zhou and Hong Zhu in the study.

The team found that about half of the individuals were between 19 and 35 years of age. No remains of older adults were found.

The ages of the victims at Hamin Mangha are similar to those found in another prehistoric mass burial, which was previously unearthed in modern-day Miaozigou in northeast China, the researchers noted.

"This similarity may indicate that the cause of the Hamin Mangha site was similar to that of the Miaozigou sites. That is, they both possibly relate to an outbreak of an acute infectious disease," wrote Zhou and Zhu.

If it was a disease, it killed off people from all age groups quickly, leaving no time for survivors to properly bury the deceased. The scientists did not speculate as to what disease it may have been.

The excavation was carried out by researchers from the Inner Mongolian Institute of Cultural Relics and Archaeology and the Research Center for Chinese Frontier Archaeology of Jilin University.