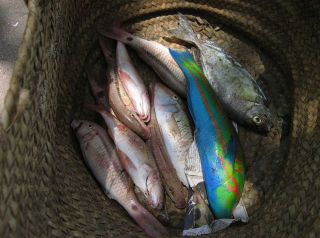 In Kenya, fishermen bring their catch from the boats onto the beach in large woven baskets.
(Image: © © Emily Darling)

Emily Darling is an associate conservation scientist at the Wildlife Conservation Society (WCS), where she coordinates a global coral reef monitoring initiative across Kenya, Madagascar, Fiji, the Solomon Islands, Indonesia and the Caribbean. For University of North Carolina at Chapel Hill, she is also leading a global database of reef-building coral communities to evaluate climate refuges on coral reefs. Follow Emily on Twitter at: @EmilySDarling. She contributed this article to Live Science's Expert Voices: Op-Ed & Insights.

Coral reefs are some of the most fascinating places on our planet. The colorful and biodiverse tropical ecosystems are home to more than 25 percent of marine species, yet corals face grave threats today from climate change, overfishing, pollution and disease that jeopardize the underwater architecture of reefs — and the fisheries they support.

Those fisheries are critical to the livelihoods and nutrition of millions of coastal peoples around the world: More than 450 million people live within 37 miles (60 kilometers) of a coral reef and depend on coral need fisheries for food and income that 80 percent of the world's coral reefs are overfished, challenging the sustainability of the fisheries they support, according to the International Coral Reef Alliance Network (ICRAN).

For me, pursuing a career as a marine biologist began in a fish market. When I was eight years old, my family lived in Indonesia for a year. Visiting the chaotic, noisy and smelly fish markets, I was fascinated by the silver, blue and green shimmering fishes and the translucent piles of squid and octopus tentacles — they revealed an underwater world hidden from me as a child.

That fascination stayed through my undergraduate research in biology at Queen's University in Kingston, Canada, where I took an three-week field course to study coral reef fish on a remote atoll in Belize — and learned how to scuba dive. I learned that overfishing, climate change, pollution, disease and invasive species threaten these ecosystems I could now see during dives in the ocean. Still completely enamored with fish upon graduation in 2005, I was awarded a Jean Royce Fellowship for women in science to learn about managing one threat to coral reefs: overfishing.

Soon after, I found myself in Kenya on the doorstep of the WCS Coral Reef Conservation Project, where I learned about coral reef fisheries management from conservationist Tim McClanahan.

Over the next four months, I bumped along coastal roads filled with potholes to interview fishermen and measure the catch they were landing. In the evenings, my colleagues and I would pore over spreadsheets with 10 years of fisheries data collected along the Kenyan coast. When the power went out, which was most nights, we had to resort to working by headlamp. By day, we would sit on the beach for hours as we waited for the fishermen to sail in with the tides. As we waited, my friend and collaborator Christina Hicks taught me Swahili, and about the families that depended on these fish for their livelihoods — and the best way to fry up the catch.

Later that year, McClanahan, Hicks and I published our first paper together, in which we showed that removing destructive fishing gear (like illegal beach seine nets that damaged corals and caught small, juvenile fish) could rebuild local fisheries. [One Fish, Two Fish, But is It True Fish? (Video )]

I have now returned to WCS, contributing to research programs on coral reef fisheries and climate change. Our goal is to strengthen community management of coral reef fisheries in a warming climate, giving local communities the tools to manage their own fisheries sustainably and improve climate resilience. In collaboration with our global partners, we are striving conserve coral reef biodiversity and support sustainable small-scale fisheries and livelihoods.

It is gratifying to work towards aligning science and resource management with critical human needs. I hope to inspire a new generation of fisheries scientists in the countries where we work, so that young girls might take inspiration from the remarkable biodiversity in their fish markets as I did, and take a dive into the undersea world of marine conservation.

Read more about women in conservation from WCS in the following Live Science articles: