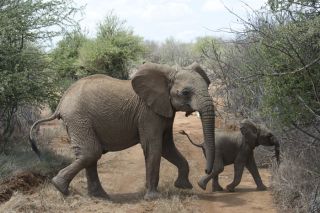 After a 22-month pregnancy, an African elephant calf is nearly inseparable from its mother. If the calf is a female, it may stay with her for life.
(Image: © Julie Larsen Maher, Copyright WCS.)

Danielle LaBruna is a geographic information systems specialist in the Conservation Support Program of the Wildlife Conservation Society (WCS). This article is the third in a series of blogs celebrating the contributions of women to the practice of conservation. LaBruna contributed this article to Live Science's Expert Voices: Op-Ed & Insights.

When I think of historic female figures in conservation, my mind jumps to two trailblazing women: First, there's Rachel Carson, whose book "Silent Spring" kick-started the American environmental movement and gave rise to the U.S. Environmental Protection Agency. Then, there's Jane Goodall , the renowned British primatologist and founder of the Jane Goodall Institute, whose dedicated work with chimpanzees has helped to promote the field of conservation in countless ways.

These women will leave behind profound conservation legacies. However, Women's History Month presents an opportunity to recognize and celebrate lesser-known, but critically important, women conservationists. Below, the stories of two such women from developing nations show how their passion and commitment have led to significant victories not only in conservation, but also in the related areas of food and economic security, health care, and education.

Wangari Maathai rose to international fame in 2004, winning the Nobel Peace Prize "for her contribution to sustainable development, democracy and peace." Long before that recognition, Maathai had established herself as an activist, politician, feminist and conservationist. She began the Green Belt Movement (GBM) in 1977 to empower rural Kenyan women to protect natural resources at a time when streams were drying up, wood was becoming scarce and food supplies were at risk.

Through that group, Maathai paid women to grow seedlings and plant trees, with the combined goals of preventing erosion, storing rainwater, and providing food and firewood to local people. What began as a small project has grown into a network of 600 community groups that tend 6,000 tree nurseries, with an incredible 51 million trees planted on both public and private Kenyan lands. GBM also educates, trains and empowers rural women and men to act as their own advocates.

Maathai's writings and activism on poverty, sustainable livelihoods, climate change, corruption and HIV/AIDS (and the connections she has made among these topics) drew the ire of powerful people. Kenya's former president, Daniel arap Moi, attempted to quiet her with threats, reportedly calling for her to abide by tradition, respect men and keep quiet. She repudiated such advice, but at great personal cost.

Though threatened by her own government, jailed, beaten and targeted for assassination, Maathai refused to be cowed. By her 2011 death from ovarian cancer, she was not only a Nobel laureate, but also a former parliament member, with honorary doctoral degrees from Williams College and Yale University. She has left a legacy of conservation, inspiration and empowerment to the people of Kenya and greater Africa through GBM, the Wangari Maathai Institute for Peace and Environmental Studies, and the Pan-African Green Belt Network.

Beatrice Ahimbisibwe, too, knows the value of planting trees. In 2003, she began reforesting a one-hectare plot on her farm in Uganda after signing up for Uganda-based EcoTrust's "Trees for Global Benefits" carbon-credit program. As a geography teacher, she was concerned about climate change and wanted to conserve Uganda's forests, which absorb and store carbon from the air. As a farmer, she wanted to invest in her land.

Thanks to the carbon credit program, she could address both interests simultaneously. The first to join the program, Ahimbisibwe gets paid in increments over its 10-year life for planting and growing trees. After those 10 years, she can harvest her trees and sell them. Her fellow villagers, who declined to participate, told her that people would come and take her land. But time has validated Ahimbisibwe's pioneering spirit.

She is pleased with her decision to participate for two reasons. First, with the carbon payments she has received, Ahimbisibwe has educated her two children, built a permanent home, purchased furniture and planned for her retirement. Second, Ahimbisibwe's success has raised her profile. Villagers respect her; she gets invited to speak at national and international conferences, and she has gained leadership skills in addition to technical knowledge. [Is a Rhino Hunt Really Conservation? (Op-Ed )]

Indeed, Ahimbisibwe is now a leader in her community. She has used some of her earnings to reinvest in her village by building a primary school. She participates in the village council, is a member of the local women's group and village bank, and serves as a carbon consultant locally and internationally. Her story should remind the world of the amazing conservation impact local women can make when given the opportunity.

Whether Nobel Laureate or geography teacher, women have made significant contributions to the planet, and these accomplishments should make the world proud — while saddened that half the globe's citizens still do not receive the rights and recognition they deserve. As New York Times writers Nick Kristoff and Sheryl WuDunn have said, the world neglects "Half the Sky" at its own risk.

This article is the third in the series "Women's History Month: Blogs from the Wildlife Conservation Society." The views expressed are those of the author and do not necessarily reflect the views of the publisher. This version of the article was originally published on Live Science.

Other articles in this series include:

How Two Women Brought a Sea Change to Conservation (Op-Ed )

Stepping up Conservation in Fiji — in Stilettos (Op-Ed )