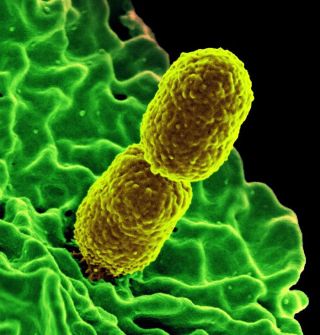 This image shows two rod-shaped bacteria called Klebsiella pneumoniae that are resistant to treatment with the “last resort” antibiotic drug called carbapenem. In this image, the mustard-colored bacteria are interacting with the green-colored human white blood cells.
(Image: © National Institute of Allergy and Infectious Diseases (NIAID))

Infections caused by drug-resistant bacteria are projected to increase in the United States if no action is taken soon, but a national effort could prevent more than half a million infections in five years, a new study finds.

In 2011, there were 310,000 cases of infection in the United States from four types of nasty bacteria that are usually acquired in hospitals: carbapenem-resistant Enterobacteriaceae (CRE), multidrug-resistant Pseudomonas aeruginosa, invasive methicillin-resistant Staphylococcus aureus (MRSA) and Clostridium difficile. (Infections with C. difficile, which can cause severe diarrhea, are not usually resistant to antibiotics, but people who take antibiotics are more prone to these infections.)

In five years, the number of infections is estimated to increase 10 percent, to 340,000 per year, according to the study, from the Centers for Disease Control and Prevention.

However, if health professionals take immediate action to better prevent the spread of these diseases, and use antibiotics more judiciously, more than 600,000 infections and 37,000 deaths could be prevented in five years, the study found.

What's more, coordinating efforts between hospitals would be even more effective than individual hospitals working by themselves, the study showed. For example, when a patient with an antibiotic-resistant infection is transferred from one hospital to another, workers should notify the new hospital about the bacteria.

"Antibiotic-resistant infections in health care settings are a growing threat in the United States, killing thousands and thousands of people each year,” Dr. Tom Frieden, director of the CDC, said in a statement. "We can dramatically reduce these infections" by improving antibiotic use and infection control, he said. [6 Superbugs to Watch Out For]

In the study, the researchers looked at what would happen if a person with a CRE infection was treated within a network of 10 hospitals that were sharing patients.

So far, "independent, institution-based efforts to prevent transmission have been inadequate," the researchers wrote in the study, published this week in the CDC journal Morbidity and Mortality Weekly Report. Now, coordinated efforts are needed.

Patients can also help stop the spread of infections by telling their doctor if they were hospitalized somewhere else with an infection, washing their hands often, and asking their health care providers to wash their hands before beginning care, said Dr. Michael Bell, deputy director of the CDC’s Division of Healthcare Quality Promotion.