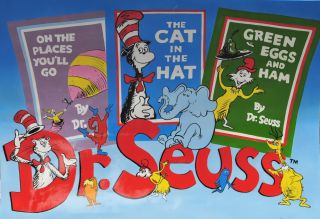 Most fans of Dr. Seuss can predict how a line from one of his books will end the moment they hear the beginning. For instance, many will fondly remember the line, "I do not like green eggs and ham," and be able to parrot what comes next: "I do not like them Sam I Am." The predictability of Dr. Seuss' lines and imaginative drawings have been catnip to young readers for decades.

Now, more than half a century after "Green Eggs and Ham" (Random House, 1960) was published, Dr. Seuss is asking a new generation of readers, "What Pet Should I Get?" (Random House, 2015). His posthumously published book, which was released yesterday, July 28, shot to the top of best-seller lists this week. The new book comes 25 years after "Oh, The Places You'll Go!" (Random House, 1990), the last book he published before his death in 1991.

The eagerness of readers to return to the "Seussian" world of fantastical creatures and nonsensical rhymes doesn't surprise scholars of Dr. Seuss. In fact, they credit the author's own difficult childhood with helping him craft stories that resonate with children in words they can't stop reading. [10 Scientific Tips for Raising Happy Kids]

The newly released book "What Pet Should I Get?" takes on the same rhythm as Dr. Seuss' previous books. The anapest meter, which consists of two short syllables followed by a long one, has a rollicking movement, similar to a gallop. For instance, in "Oh, The Places You'll Go!" a line reads:

"Oh, the places you'll go! There is fun to be done!" The first two syllables are unstressed, softer sounding tones, while the third, bolded syllables are stressed.

Dr. Seuss also incorporated many made-up words into his books, such as "thneeds" and "glupitty-glup" and "schloppity-schlopp" from "The Lorax" (Random House, 1971).

"The words that he made up are fun for children — they see the cleverness behind the word construct and the meaning of the word," said Ann Neely, a professor of children's literature at Vanderbilt University's Peabody College in Nashville, Tennessee.

And though some parents worry that made-up words could confuse children, the nonsensical jumble of letters in many Dr. Seuss books actually helps children read, Neely said, because it heightens their awareness of the sounds that letters make.

"The words that he made up were often funny, and it helps children with their literacy skills later on as they're learning to read if they've heard how language can be played with," Neely told Live Science.

The predictable rhythm of the sentences can also play a big role in teaching children to read. "That gave children confidence in their own reading ability," Neely said. "In some ways, it's like Mother Goose rhymes, in that when we say, 'Oh, he's like Humpty Dumpty,' we know that it's because 'all the king's horses and all the king's men couldn't put Humpty together again.'"

But not all of Dr. Seuss' tales were pulled from his imagination. The inspiration for the vibrant, distinct artwork that accompanied his work, and some of the stories that seemed to jump off the page, came from life experiences that stretched back to the author's own childhood. [11 Facts Every Parent Should Know About Their Baby's Brain]

"Dr. Seuss" was the pen name of Theodor Geisel, born in 1904 to a German immigrant family with a brewery business in Springfield, Massachusetts. "He was destined to be the scion of a very, very prosperous family," until two particularly jarring events during his adolescence, said Donald Pease, a professor of English at Dartmouth College, in Hanover, New Hampshire, and author of the book, "Theodor Seuss Geisel" (Oxford University Press, 2010).

In 1914, against the backdrop of World War I, 10-year-old Geisel walked with his 12-year-old sister, Marnie, back and forth to school on a road called Mulberry Street. During their walks, the children's young contemporaries would accost them with bricks and bats and scream, "Let's kill the Kaiser's kid and let's get the drunken Hun," Pease said.

"Hun" was offensively used toward Germans during WWI as a reference to the medieval Hunnic Empire of Attila the Hun. Geisel's grandfather decided to prove his family's loyalty to the United States by buying $1,000 worth of Liberty Bonds (sold in the U.S. to support the Allied cause) from his grandson, who then was catapulted into the top 10 of Springfield's Boy Scout bonds salesmen.

Not long after, Theodore Roosevelt (then, the former president) showed up in Springfield to award the Springfield Boy Scout Troop medals for its significant contribution to the war effort. However, one medal went missing. When Geisel, the tenth and final boy in line, faced Roosevelt, instead of receiving a medal, he got a lecture.

"Theodore Roosevelt looked down on Geisel and screamed, 'What are you doing here, little boy? Who are you?'" Pease told Live Science. The whereabouts of the missing medal is still a mystery, but Pease said some scholars suspect anti-German townspeople may have tampered with the medal count.

The experience may have been on his mind when he wrote one of the most remembered lines in "Horton Hears a Who" (Random House, 1954). In the book, Horton the elephant hears a yelp from a speck of dust and decides he must save the yelper "Because, after all, a person's a person, no matter how small."

It was at Dartmouth that Geisel "was able to obtain access to some of the most remarkable dimensions of his creative personality," Pease said.

When a Prohibition violation got him dismissed from the campus magazine, Geisel began playing around with a variety of pen names until he settled on "Seuss," his mother's maiden name, during his senior year at Dartmouth, Pease said.

After leaving Dartmouth, Geisel worked as a political cartoonist and advertising artist. On the eve of the World War II, Geisel wrote propaganda cartoons to encourage Americans to fight for the Allied powers. But in 1945, after drawing more than 400 cartoons, Geisel grew dissatisfied with the work, and likened it to the bullying attitudes he encountered in his childhood, Pease said.

Geisel decided to pen children's books because "[a kid's] humor isn't conditioned by an adult's need to target someone as an object of aggression" like with a caricature, Pease said. Rather, children's humor is unconditional and "structured in the sense of fairness and justice," he added. [7 Things That Will Make You Happy]

Many of Geisel's works are reactions to current events, such as the Cold War. "When he writes "The Butter Battle Book" (Random House, 1984), he has the little boy look at his grandfather who butters his bread on the other side," different from the neighboring Zooks, and thinks, Why do they need to have this mutual assured reciprocal destruction? Pease said.

Geisel appealed to children's sense of fairness with books like "The Sneetches and Other Stories" (Random House, 1961), in which Sneetches with stars and Sneetches without stars discover that underneath the stars, they're very similar. "He's writing children's books not to expose them to war, but to get children to recognize that the world can exist without that mentality," Pease said.

Despite his enduring legacy, Geisel's contributions to children's literature went relatively unnoticed until the publication of "The Cat in the Hat" (Random House, 1957).

"The Cat" brought fame to his previous books. "It's when he writes "The Cat in the Hat" that everything changes," Pease said.

The book was almost instantly recognized as one that could instill a love of reading in children, and "that it can be a lifelong pleasure," Pease said.

The newly released "What Pet Should I Get?" could have a similar impact on readers today, particularly children who are on the cusp of reading the author's classic tales, because this allows them to experience an "old new book written by Dr. Seuss," Pease said.

"What Pet Should I Get?" may have been a type of precursor draft of another Dr. Seuss classic, "One Fish Two Fish Red Fish Blue Fish" (Random House, 1960), because the same siblings appear in both books and the dilemma of which pet to get seems to be settled in "One Fish," Pease said.

And the themes in "What Pet" echo themes of previous Dr. Seuss books, he added. "All of these are dimensions of a world of fairness and social justice, and celebration of difference that is at the core of Seussian childlike imagination," Pease said.