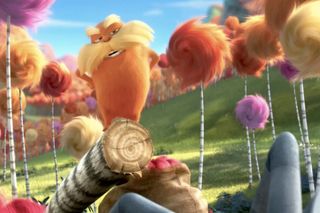 The latest of Dr. Seuss' creations to hit the big screen, "The Lorax" was released on March 2, 2012.
(Image: © Illumination Entertainment/Universal Pictures Trailer)

Dr. Seuss, the children's book author born Theodor Seuss Geisel 108 years ago today (March 2), knew how to craft a catchy rhyme. But these rhymes aren't just child's play — research suggests that rhyming is built into our brains, and is even key to helping children learn to read.

"If you hear one word, words that rhyme with that word will get activated" in the brain, said Michael Wagner, an experimental linguist at McGill University in Montreal. "It seems like this is one of the factors that explains why rhyme seems to work so well and is so pleasing to us."

Indeed, Dr. Seuss' playful rhymes have pleased generations of children and their parents. "The Cat in the Hat" (Random House, 1957), for example, has sold more than 11 million copies. The evidence suggests that Seuss knew his audience: Rhymes are very compelling for young children, and their brains seem to process them even better than they process the meanings of other words.

In one 2004 study, researchers read lists of words to young children and then asked them to recall and recite the words they'd heard. The words on the list were all related: A child might hear "nap," "bed," "rest," "peace," "wake," "dream," "doze" and "snore," for example. When adults take this test, they often inject the word "sleep" into their recitation, despite the fact that it appears nowhere on the original list. The litany of sleep-related words has tricked their brain into assuming the word's presence.

Young kids responded differently, however. Instead of interjecting new words based on meaning, 5-year-olds added new words that rhymed with the words on the original list. A kid who heard "nap," for example, might throw in "gap" or "sap." In their brains, the rhyme overrode the meaning. [11 Facts About Baby Brains]

In fact, rhyme is crucial to learning how to read. When we speak, we think we know what a hard "C" sounds like — "Kk" — and that we represent that sound with a "C" symbol. But consonants change their sound depending on the vowels that follow them. Prepare yourself to say "cat" and compare that with the shape your mouth takes when you start to say "cot."

What this means is that kids have to learn, to borrow a Seussian phrase, that a C is a C, no matter the vowel. The process of learning this is called "phoneme awareness," and rhymes help kids figure it out, said Miriam Cherkes-Julkowski, an educational consultant who works in Connecticut, New York, New Jersey and Arizona.

In other words, rhymes are the framework that helps kids understand the pieces of a word. The part of the word that's key is the "rime," the syllable that starts at the vowel and goes through the end of the word.

"This rime with an 'i' becomes really, really critical in reading," Cherkes-Julkowski said. "By prepping kids to pay attention to that part of the syllable, the vowel through the end, you're also prepping them to orient through print."

Most of the time, reading isn't taught with a focus on the rime, Cherkes-Julkowski said. Kids might learn to read phonetically, sounding out letter by letter. That's not always best, especially for kids with dyslexia and learning disabilities, she said.

"No human being who is a reader reads left to right," she said. "You can't do it."

Take the word "rage." If you start out with the R, you get an "Rrr" sound. Next, you have an A, but is it a long or a short A? There's no way to know until you get the next letter — a G. "Aha," you might think, "'Rag!' It's a short A." But now you hit that E, and it changes everything. Even the G doesn't sound the same anymore.

In other words, even when we're not rhyming, we're focused on the rime. Many kids can figure this all out with a phonetic reading approach, Cherkes-Julkowski said. But for kids with dyslexia, learning to pay attention to the rime is the key to reading.

"It gives the child the information that he or she needs that, 'Aha, there are some patterns, and the patterns lie within the rime,'" she said.

"I have a number of students who were unable to learn to read any other way than through rime-onset," Lacey-Castelot told LiveScience. "These students aptly label this instruction amazing, life-saving, miraculous."

As for Dr. Seuss, he was ahead of the rime-reading curve.

"He nicely sets it up for them," Cherkes-Julkowski said. "He introduces it to them in a fun way before they ever have to make sense out of print."