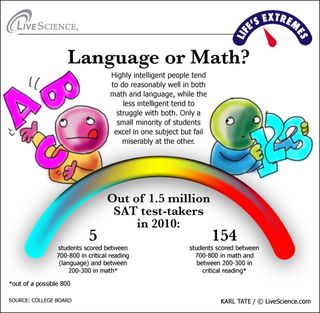 Which do you prefer: numbers or words?
(Image: © Karl Tate, LiveScience Infographic Artist)

Do you know what "abecedarian" means? What about the solution to 250 x 11?

Most people would agree they are better at verbal or math subjects in school, as grades usually do attest. Highly intelligent individuals often do well in both subjects, and may know the answers to both questions above, lickety-split, while less intelligent people can struggle. But a minority of us excels in the language department and bombs at mathematics, or vice versa.

(As an adjective, abecedarian refers to something relating to the alphabet; 2,750 is the solution to the equation.)

These extremes in ability speak (or equate) to the very makeup of our brains. "The brain systems for maths and language are quite different," said Brian Butterworth, emeritus professor of cognitive neuropsychology at University College London, using British English's dialect for "math." "So perhaps it is not surprising that these two capacities are rather independent."

By learning more about the regions of our brains responsible for language and math processing, researchers hope to someday better help those with severe deficits, such as in reading ability, called dyslexia, and general numeracy, called dyscalculia.

Verbal ability — reading, writing and speaking — arises from across much of our brain, requiring key elements to harmonize.

When we read, for example, the "ventral stream" located at the rear of the head and involved in object recognition becomes active. Parietal (on the side) and frontal regions activate as well, as revealed by neuroimaging studies. These brain areas figure out the "sounds" of letters and the semantics of words. [Inside the Brain: A Journey Through Time]

In about 5 percent to 12 percent of the population with dyslexia, reading is fraught with difficulty. Spelling is sometimes a problem, too. An unknown percentage of the population also grapples with so-called dysgraphia, an inability to write. Dysgraphics make ill-formed letters with improper spacing, or produce the wrong word for a concept, such as "girl" or "boy" instead of "child."

Brain injuries can also cause these verbal deficits, same as with math. Genetics, though, clearly has a profound impact, based on learning disabilities running in families and genetic ailments that produce clear deficits.

In the case of well-studied dyslexia, several candidate genes have emerged that code for how neurons in the brain form interconnections.

"The idea is that throughout gestation and early development, neurons traveling to where they should be going don't reach their targets," said Guinevere Eden, director of the Center for the Study of Learning at Georgetown University Medical Center, who studies dyslexia.

A head for numbers

A typically separate group of people has trouble not with reading and writing, but with learning basic mathematics. Dyscalculia affects some 6 percent to 8 percent of the world population, studies suggest. As with dyslexia, something of a genetic component exists, with identical twins sharing dyscalculia almost 60 percent of the time. [Seeing Double: 8 Fascinating Facts About Twins]

Several brain areas activate when subjects perform calculations, in particular the intraparietal sulcus, located at the top-back area of our heads.

"This appears to be the 'math center' of the brain," said Melissa Libertus, a postdoctoral fellow in the department of psychological and brain sciences at Johns Hopkins University. "If this part of the brain has a problem, then those people have math problems."

Libertus has just published a paper showing that preschoolers have varying degrees of "number sense," or an innate ability to estimate quantities. It's likely, Libertus said, that people with higher inborn skills perform better at math throughout their lives. Similarly, Eden has studied children with precocious reading abilities, showing that some of us just have a knack.

On the other hand, being born with dyslexia or dyscalculia, does not necessarily produce a math or language person. In this way, upbringing and education frequently lead to language or math preferences based on innate strengths and weaknesses.

"Of course, environment and experience play a major role," Butterworth said. Parents who have a lot of books around the house might encourage a child to get more into reading and writing, whereas math games promote doing sums instead.

Although our brains are evolutionarily hard-wired for speech and a basic sense of numbers, we must be taught to read, write and do arithmetic. And regardless of one's natural abilities, practice — to an extent — can make perfect.

Many prodigious "human calculators," for example, admit to being obsessed with numbers, thinking about and working with them all day. Similarly, polyglots such as Emil Krebs, a German man who claimed mastery of 68 languages, must study hard to become fluent in non-native tongues.

Supporting this "practice makes perfect" view is that fact that language or math abilities are not tied to IQ scores. Shakuntala Devi, an Indian woman, astoundingly multiplied two 13 digit numbers in her head in 28 seconds, yet possessed an average IQ.

Math "savants" go even further, such as Dustin Hoffman's character in "Rain Man." These rare individuals perform feats of mathematical wizardry but have terrible verbal skills and low IQ scores.

Ultimately, markedly skewed abilities in language and math come about from a confluence of factors, researchers agree. Genes, development and personal zeal all determine our letter grades and where we fall on the number line.