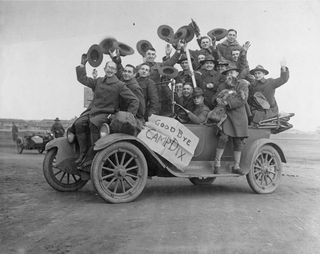 Though neutral during the first half of World War I, American attitudes shifted and by 1917, U.S. forces were gathering at Fort Dix, New Jersey (see photo), and elsewhere.

For most American troops, England was their first stop before entering the war on the European continent. Here, American soldiers leave England and head toward the front lines.

King George of England speaks with Scottish troops stationed in France during World War I in this undated photograph.

An unnamed British soldier plays with a small Belgian child in Adinkerke, Belgium, in this undated photograph.

The 369th Infantry Regiment, also known as the Harlem Hellfighters for their fierce courage in battle, were a largely African-American regiment from New York. Several members were awarded the French Croix de Guerre for bravery in action.

Doctors struggled to keep up with advances in weaponry during World War I. Here, medics attend to a wounded soldier in France.

Caring for the Wounded

The American Red Cross was active throughout Europe during World War I. Here, Mary Withers offered water to wounded British soldiers in France, 1918.

A Break in the Battle

In 1918, King George V of England paid his respects at an American cemetery near St. Quentin Canal, France.