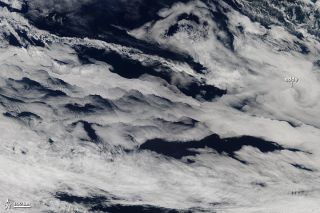 Green globs of little critters in the ocean are responsible for half of the cloud droplets that cover the Southern Ocean during the summer, a new study finds. This link between the critters and clouds provides needed insight for predicting the effects of climate change, the researchers say.

Marine phytoplankton, which are tiny organisms that rely on light to grow and spread into globs in the ocean, influence how clouds accumulate droplets. Researchers found that the number of droplets over the Southern Ocean nearly doubles during summer months because the sun-loving plankton are more abundant then. Clouds with more droplets are brighter and able to reflect more sunlight, preventing solar radiation from reaching Earth, the scientists said.

White, fluffy pillows of clouds in the sky are doing more than posing for pictures — the tiny water droplets in each cloud are powerful sunlight deflectors that can turn heat away before it enters Earth's atmosphere. The brightest clouds have the most water droplets, but the abundance of water droplets can depend on marine life, which emit microscopic particles (called aerosols) that float up through the atmosphere, gather water droplets and join together to form clouds. [Image Gallery: Curious Clouds]

Understanding the link between marine life and cloud droplet formation is a vital part of climate change predictions. "We need to know if we're already saturated in terms of aerosols affecting clouds and making them brighter,” said Daniel McCoy, one of the lead authors of the study and a doctoral student in atmospheric sciences at the University of Washington in Seattle. If the clouds can squeeze in more droplets, however, it’s possible to "push the clouds to be brighter" from man-made aerosols.

Determining the exact source of aerosols, which result from both nonhuman and human activities, is a tricky business, because once aerosols leave the surface of the Earth and enter the atmosphere, very little identification remains to tie them to particular sources.

The study used sensitive satellite tools and modeling programs to determine the types and amounts of aerosols emitted over the Southern Ocean, covering the region from the south of Brazil down to the Tierra del Fuego, a group of islands on the southernmost tip of South America. The Southern Ocean is almost completely devoid of human influence, making it an ideal laboratory to study the natural processes that form aerosols, which can help researchers better understand the effect of human-caused (or anthropogenic) aerosols.

The researchers used satellites to study clouds over the Southern Ocean, and measured the concentration of cloud droplets per cloud. The scientists found that portions of the Southern Ocean that were enriched in green phytoplankton corresponded to the locations of clouds with many water droplets, McCoy said. The phytoplankton get their green color from the chemical chlorophyll, which allows the organisms to absorb sunlight.

Since the aerosols are difficult to distinguish when viewed from space, the researchers used models that tracked the compound dimethyl sulfide, which is released by phytoplankton and turns into a sulfate aerosol in the atmosphere. They also designed a model that included simulations of the process by which salty water known as "sea spray" is enriched with organic matter produced by phytoplankton (essentially, phytoplankton poop).

Not all aerosols attract water droplets, said Susannah Burrows, the other lead author of the study and a climate scientist at the Department of Energy's Pacific Northwest National Laboratory. Although most aerosols are carried up by the same atmospheric circulation patterns, their chemical and physical properties determine whether or not they become "cloud condensation nuclei," which are the points around which droplets form before they become cloud droplets.

Smaller aerosols may have a harder time attracting water droplets than do larger ones, Burrows said. Solubility also plays a role in determining how easily the aerosol will take up water vapor from the atmosphere. Sea salt is very soluble and "likes to suck up water vapor from the atmosphere, so organic particles are less effective cloud-condensation nuclei than salt," Burrows told Live Science.

The researchers found that they could predict the observed concentration of cloud droplets with their model. The results were "interesting in a climate sense, because the amount of sunlight that is being reflected by these clouds is to some extent determined by the number of cloud droplets," McCoy told Live Science.

The scientists calculated the amount of light reflected by the clouds and determined that "it ends up being a 60 percent increase in cloud droplets throughout the year, doubling in summer, when the phytoplankton are most active, translating to a 4-watt-per-meter-squared increase in reflected sunlight, and 10-watt-per-meter-squared increase during the summer," McCoy said. [Top 10 Surprising Results of Global Warming]

Aerosols result not only from marine life, but also from volcanic emissions, desert dust and man-made pollution. Aerosols can reflect or absorb light, depending on their composition and color. Many aerosols are a mixture of both solid and liquid phases and are either produced as aerosols or start off as another compound that reacts to gases in the atmosphere and becomes an aerosol. Usually, brightly hued or translucent particles reflect radiation, and darker aerosols absorb light, according to NASA.

Volcanic eruptions are accompanied by sulfur-dioxide gas, which turns into sulfate aerosols in the atmosphere and can temporarily drop global temperatures. Sulfate aerosols from the 1991 eruption of Mount Pinatubo, in the Philippines, spread throughout the atmosphere, reflecting sunlight and cooling the Earth.

Most sulfate aerosols rise in the Northern Hemisphere as a result of industrial activity, such as burning coal. These tiny particles tend to linger in the atmosphere for only about three to five days.

Phytoplankton — the tiny, green algae at the surface of the ocean — produce airborne gases and organic matter that form marine aerosols. During the summer, when phytoplankton take advantage of the extra sunlight to proliferate, the wind picks up water and releases it into the atmosphere as sea spray. This enriched salty water enhances the ability of the sea spray aerosols to attract water droplets that eventually condense into cloud droplets, McCoy said.

The researchers chose to focus on the less polluted Southern Ocean to eliminate the influence of human-caused aerosols, Burrows said. There are natural, marine aerosols over the North Atlantic region; however, "there are a lot of pesky continents and people that make it hard to do these studies," McCoy said.

Focusing on the Southern Ocean allowed the researchers rule out wind speed, sea surface temperature and other variables that could influence cloud-droplet concentration. Only marine aerosols could explain seasonal and geographic patterns over the Southern Ocean, Burrows said.

"I think that the big, important climate implication from this is that it gives us a way of understanding in a top-down, observationally based way what the interaction is between phytoplankton and cloud properties," McCoy said.

Studying the relationship between ocean life and clouds over the Southern Ocean could help researchers better understand similar processes elsewhere in the world, including places where human activities are a bigger factor, the researchers said.

The study "helps us have a better idea of what [factors] the climate change predictionshould be including," McCoy said.

The research was published July 17 in the journal Science Advances.