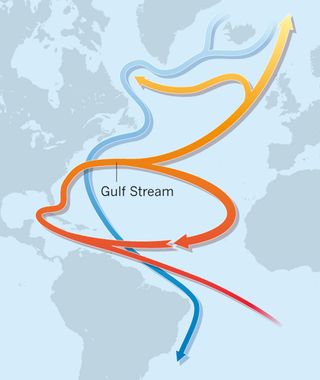 The jet stream off the East Coast of the United States controls an important climate pattern in the Atlantic Ocean, a new study finds.

The jet stream's swooping path over the Atlantic Ocean is steered by a fluctuating pressure system called the North Atlantic Oscillation (NAO). A positive NAO aims the jet stream toward Ireland, while a negative NAO sends the winds southward, in a pattern similar to the polar vortex of recent winters.

Depending on where the powerful winds cross the Atlantic, the jet stream can have a cooling or warming effect on sea surface temperatures in the North Atlantic Ocean, according to the study, published today (May 27) in the journal Nature.

Sea surface temperatures in the North Atlantic swing between cool and warm phases every 20 to 40 years, flipping by about 1 degree Fahrenheit (about 0.6 degrees Celsius). This natural climate cycle is called the Atlantic Multidecadal Oscillation (AMO) and has occurred for at least 1,000 years, earlier studies show. Like its Pacific climate cousin, El Niño, the AMO can alter global weather patterns. For instance, fewer hurricanes hit the United States during a negative AMO, and Britain and Ireland see drier summers. [7 Ways the Earth Changes in the Blink of an Eye]

"The North Atlantic Oscillation is really driving these changes in ocean circulation," said Gerald McCarthy, lead study author and an oceanographer at the University of Southampton in the United Kingdom.

In the past 90 years, the Atlantic Multidecadal Oscillation has undergone three major transitions: warming in the 1930s and mid-1990s and cooling in the 1960s. Those shifts can be attributed to the North Atlantic Oscillation, which switched phases just before the AMO did, the study reported.

The researchers tracked the Atlantic Ocean current by analyzing tide gauge records from the East Coast since the 1920s. Local sea level differences along the coast reflect the strength and temperature of the current offshore, they said. The research team compared the ocean current patterns to weather records from the same period.

Ultimately, changes in the jet stream winds can also alter the Atlantic meridional overturning circulation, a mega-current that includes the Gulf Stream. This Atlantic current is a giant conveyor belt that carries warm tropical water into the North Atlantic Ocean and polar region near Greenland and returns cold water to the tropics. The cold, dense water sinks to the deep ocean and flows south. Europe owes its mild climate to the heat carried northward by this current.

"Eventually the changes in ocean circulation that we see reorganize the heat in the North Atlantic and give us the AMO," McCarthy told Live Science

The study suggests that the AMO is now moving into a negative phase, in which the current is weaker and less heat is carried northward from the tropics. This could bring cooling in the Atlantic, but it would also accelerate sea level rise on the East Coast and add to drought in the African Sahel, the region between the Sahara and the savannas, the researchers said.