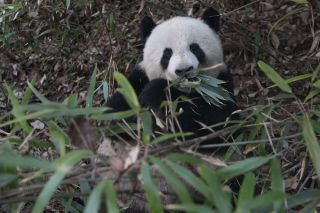 Pandas can survive on a bamboo diet because, like the three-toed sloth, they have a low metabolism.
(Image: © Fuwen Wei)

Giant pandas have an insatiable hankering for bamboo, but scientists have long wondered how the bears survive on such a fibrous and low-nutrient plant. Now, a new study finds that giant pandas have clever ways to conserve energy, including having lazy lifestyles, small organs and special genes.

The researchers followed five captive and three wild giant pandas (Ailuropoda melanoleuca) for about a year. By using GPS trackers and analyzing chemicals excreted in the pandas' poop, they were able to measure the amount of energy the pandas spent each day. Surprisingly, the pandas expended only about 38 percent of the energy that an animal with the same body mass would require.

"We thought the metabolism of the panda would be low because the bamboo diet contains low energy," said senior author Fuwen Wei, a professor of zoology at the Chinese Academy of Sciences in Beijing. "But it is very surprising that it is this exceptionally low, equal to the three-toed sloth, and much lower than the koala." [Butter Balls: Photos of Playful Pandas]

However, while it's unknown how the rock rat and golden mole conserve energy, the researchers found several ways that pandas save calories.

For starters, the GPS recordings showed that pandas are a lazy bunch; they don't move a lot, and when they do, they move slowly. Captive pandas spent just a third of their time, and wild pandas about half of their time, moving around, the researchers found. Furthermore, wild pandas forage at an average speed of 50 feet (15.5 meters) an hour, a rate that is "very low," the researchers wrote in the study.

The researchers also reviewed giant panda autopsy data, and found that relative to their size, the animals have a smaller brain, liver and kidneys than other bears. These small organs likely require less energy to function, saving the pandas precious calories, the researchers said.

Finally, the research team looked at the giant panda's thyroid hormones, which regulate metabolism. A hormone sample taken from the captive pandas showed that levels of two thyroid hormones — thyroxine and triiodothyronine — were about half of what is seen in mammals with the same body mass, the researchers found.

In fact, these hormone levels were even lower than those seen in hibernating black bears (Ursus americanus), they said. Interestingly, giant pandas have thyroid hormone levels comparable to the gray seal (Halichoerus grypus), which lowers its metabolism while diving to conserve energy, the researchers said.

When they examined the giant panda's genome, they found it had an intriguing genetic mutation in the DUOX2 gene, which is involved in thyroid hormone production. In humans, mutations in the DUOX2 gene can lead to underactive thyroids, the researchers said. So, it makes sense that the panda's low levels of thyroxine and triiodothyronine are "probably caused by a genetic mutation in the thyroid hormone," Wei told Live Science.

The study was published online today (July 9) in the journal Science.