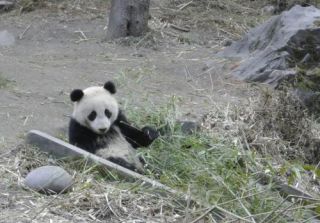 Cherubic charm: Pandas get their cuteness from their facial roundness — which is partly created by their strong jaw muscles and large, crushing molars— as well as from their Mickey Mouse-like ears, oval eye patches and roly-poly bodies.
(Image: © Sue Nichols, Michigan State University Center for Systems Integration and Sustainability)

Only about 1,590 giant pandas remain in the wild — distributed among a few mountain ranges in Central China. Because the giant panda, an endangered species, is among the world's rarest animals, the Chinese government has established more than 50 panda reserves. Nevertheless, only about 61 percent of China's surviving panda population is protected in these reserves.

Experts in China and Michigan State University are feverishly working together to increase the size of populations of wild, protected pandas. Their work includes breeding captive pandas via artificial insemination in veritable panda-ariums. It also includes re-introducing young, captive-born pandas into Southwestern China's Wolong Nature Reserve, where they are protected.

Once a young panda arrives at Wolong, it initially lives in a section of the reserve that has been converted into something like a survivalist boot camp for pandas. Expansive panda enclosures within the boot camp are located on steep, panda-friendly hills and are filled with trees and bamboo. With mother serving as drill sergeant, each new panda recruit learns survival skills, such as how to forage for food and avoid predators.

Dressed for panda success, keepers who monitor and care for the pandas wear panda suits as camouflage, to help the animals maintain a healthy fear of humans.

When deemed ready for "the real world," each young recruit in Wolong boot camp is released to the wild.

With funding from the National Science Foundation (NSF), Jianguo "Jack" Liu, who holds the Rachel Carson Chair in Sustainability at Michigan State University, is contributing to the Wolong re-introduction program by helping to improve panda habitat in Wolong. He and his team are generating multi-disciplinary analyses of panda habitat that incorporate information about the habits of local villagers, demographic changes in the labor force, the current state and anticipated availability of bamboo and panda activity obtained by tracking collared pandas in the wild.

The successes of Liu and his students include laying the foundation for a policy to subsidize the cost of electricity used by the reserve's human residents; the goal is to discourage residents from chopping down trees in panda habitat for use as firewood. In addition, Liu recently discovered that reserve residents have been keeping horses in the reserve, mostly to bolster panda tourism. But these horses have been consuming large amounts of bamboo, and thereby destroying panda habitat.

"We have been focusing on identifying how panda habitat changes over time and across space," says Liu. "This is very important because when you release pandas, you need to know where the good places to release pandas are. We need to release pandas in good habitat so that pandas can survive and sustain themselves for a long time."

Black and White and Wanted All Over

Threats to panda survival include poaching and smuggling, which is promoted by the black market for panda fur. In addition, the panda's primary habitat is located in the forests of China's Yangtze Basin region — the capital of China's economic boom. As a result, panda habitat is increasingly being fragmented by roads and railroads that isolate panda populations and prevent mating across groups.

In addition, an adult panda must eat about 28 pounds of bamboo per day to fulfill its nutritional needs. Unfortunately, however, pandas must increasingly compete for their needed bamboo with people who use this plant as food for livestock, an ingredient for medicines and raw material for musical instruments. What's more, research conducted by a research team that includes Liu and is partially funded by NSF indicates that by the end of the 21st century, climate change may kill off swaths of bamboo that pandas need to survive.

Another problem: the natural cycle of bamboo growth involves massive periodic die-offs. To cope with a die-off in any particular area, pandas must move to non-impacted areas. However, such movement is sometimes obstructed by the shrinkage and fragmentation of panda habitat.

For more information about pandas as well as videos and photos of pandas, see Michigan State University's Web site on pandas.