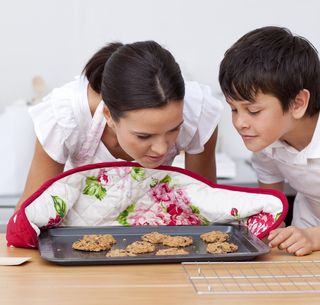 People who can vividly imagine smells, such as freshly baked cookies or even wet paint, tend to weigh more than people whose olfactory imaginations are less sharp, new research finds.

The ability to imagine odors varies greatly among people, ranging from people who can easily imagine the delicate, sweet aroma of a rose bouquet to those who struggle to recall the scent of a tuna casserole.

Researchers wondered whether people who adeptly imagine smells, especially food odors, also tend to struggle with obesity. Previous research has shown that food cravings are associated with obesity, and that the intensity of people's food cravings is related to the vividness of their mental images of food, said the new study's lead researcher, Barkha Patel, a postdoctoral fellow in psychiatry at Yale University. [11 Surprising Things That Can Make Us Gain Weight]

To investigate, the researchers gave 25 people three questionnaires asking them to rate their mental-imagery abilities, including the vividness of their visual imagery, olfactory imagery and food imagery. In each question, participants were asked to first vividly imagine certain scenarios, and then rate the vividness of the image on a scale of 1 to 5, Patel said.

For instance, people might be asked to rate their ability to imagine "the fragrance of the soap or shampoo you use to wash," she said.

As predicted, the people in the study who had higher body mass indexes (BMIs) reported more vivid mental depictions of odors and foods than people with lower BMIs, the researchers found. In fact, olfactory imagery was the best predictor of BMI out of all the measures, the researchers considered, including visual imagery and food imagery, they found.

"People who were obese (had higher BMIs) were better able to imagine odors — both food and nonfood odors," Patel told Live Science in an email.

To check the findings, the researchers repeated the experiment with 57 new participants, and got the same results. They plan to present the research on Friday (July 10) at the annual meeting of the Society for the Study of Ingestive Behavior, a society that researches the science of eating and drinking behaviors.

The results suggest that olfactory imagery may be linked to food cravings, the researchers said.

"Being better able to imagine odors could intensify the craving experience, which in turn would encourage food consumption," Patel said. "However, if the ability to imagine odors was disrupted by something like a walk, for example, perhaps cravings would diminish, and we wouldn't feel the need to eat."

The finding may help researchers develop weight-loss programs better tailored for individuals, she said. However, in future studies, scientists should assess people's imagery ability directly, instead of relying on self-reported measures, Patel said.