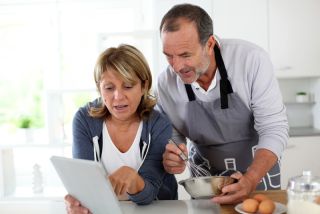 Forget the piles of oil-splattered cookbooks. Leave behind that illegible grocery list. All-in-one apps for the home cook now offer a full suite of recipes, meal planners and automatic lists that can make time in the kitchen more fun.

The dinner hour can be stressful. You're home late from work, and your stomach is rumbling. Research suggests, however, that you shouldn't give in to takeout temptation too often. One study presented at the annual meeting of the American Public Health Association in November 2014 found that people who cooked six or seven times a week ate about 140 fewer calories each day than those who cooked once a week or less. These individuals also ate less fat and less sugar than those who didn't cook. Moreover, people who frequently cooked at home ate fewer calories and picked healthier meals even when they did go out to eat.

Cooking has also been linked with longer life expectancy in multiple studies. For example, a study published in the journal Public Health Nutrition in 2012 found that elderly people who cooked at home were 47 percent more likely to survive for more than 10 years than those who didn't cook at home.

Even the most reluctant chef might come to enjoy standing over the stove after downloading our favorite app to make cooking more palatable. Paprika ($4.99, iOS and Android) is considered a powerhouse app among foodies, and for good reason. This fully customizable app lets users import recipes from across the Internet. It also wins high praise for its ability to sync across multiple devices.

Paprika is easy to use. To import recipes, use the in-app browser to search for favorites. The importer works on big sites like Epicurious and Allrecipes, as well as niche food blogs. A long list of suggested recipe sites can provide extra inspiration in the hunt for new meals. Got a family recipe tucked away in a drawer? Paprika also lets you type in recipes manually.

The app streamlines your trip to the grocery store, too. Tap the shopping cart icon at the top of an imported recipe to get a full list of the ingredients you'll need. It's easy to check off any you already have in the pantry, and the grocery list automatically sorts foods by aisle. A meal-planning calendar lets you design menus by the week or month.

The app auto-locks the screen so cooks can glance at the recipe instructions without having to wake up their phones or tablets every few minutes. As a bonus, a tap of the finger highlights one step in the recipe at the time, making it easier to keep your place. You can scale recipes up or down automatically, or use the built-in converter to see, for example, how many teaspoons make a tablespoon.

And if you're the sort to scribble in your cookbook margins, have no fear: A "notes" section provides a place to add alterations to recipes.

The only major downside to Paprika is the cost. You'll have to buy multiple versions of the app if you have multiple different types of devices (an iPad and a laptop, for example). Those purchases can add up if you plan your meals on your computer, cook with your iPad and grocery shop with your iPhone. On the other hand, it'll still cost you less than your average cookbook, and the recipe possibilities are nearly endless.

Since Paprika is a paid app, you may also get a bit of security for your recipes. In recent years, the food-app crowd has been culled, with free programs like ZipList going out of business and taking any untransferred data with them. There are no guarantees in the world of technology, but paid services have the advantage of steady cash flow.

A (mostly) free alternative to Paprika is BigOven (free, iOS, Android). This app boasts access to more than 350,000 recipes — though some recipe collections are for pro users only, and users of the free version can import only limited recipes per month. A pro membership costs $19.99 a year or $1.99 per month, and also kills ads, enables unlimited recipe imports and includes 25 free recipe scans, which let you snap a photo of a paper recipe on your phone to import into the app. (The free version of the app comes with just three free scans.)

BigOven gets points for its gorgeous design, which greets users with beautifully staged food photography. Cream-cheese brownies, anyone? Importing recipes from the Internet is nearly as easy as on Paprika, and the extensive in-app recipe library is hard to beat. One of the best features comes in the menu lists, which categorize recipes by descriptors like "slow cooker" or "kid friendly." These lists are also the place to go to find recipes for specific cuisines or special diets. There's even a section that sorts meals by weather.

Like Paprika, BigOven has a grocery-list feature that sorts items by aisle and is accessible directly from the recipe. There is also a meal-planning calendar, though navigating to these features is a little less intuitive than on Paprika. One very smart feature is the Use Up Leftovers widget, which lets you enter up to three ingredients to get recipes that include them.

Unlocking the pro features really makes this app sing, but even the basic version is a big help for a busy home cook.

With similar features to Paprika and Big Oven, Pepperplate (free, iOS, Android) works well for planning meals and making shopping lists. But importing recipes into this app is more of a headache than with our top two choices; you have to go to the Pepperplate website to copy-paste the recipe URL, or download a bookmarklet into your browser.

Once the recipes are actually in the app, Pepperplate is a breeze, and its sleek design makes it easy on the eyes. One advantage of Pepperplate is that recipes are saved to your device, so you can access them even without an Internet connection.

The popular website Allrecipes.com has a huge database of user-uploaded recipes and ratings, and the website's app, Dinner Spinner (free, iOS, Android) offers on-the-go access to Allrecipes' offerings, including instructional videos. The app's search features are comprehensive, allowing users to comb through recipes by ingredient, cuisine or prep time. Dinner Spinner includes a grocery-list feature and can scan barcodes at the store to find recipes using those ingredients.

Mouthwatering photos draw users in to the Gojee Food and Drink Recipe App (free, iOS). This app provides inspiration in the form of sumptuous food photography aggregated from food bloggers around the Web. Recipes are attached, and the app includes a grocery-list feature. The app's search feature includes an option to look for dishes using ingredients you already have in your pantry. A few years back, Gojee inexplicably veered into high fashion, presenting diamonds and expensive lingerie alongside its foodie offerings, but recently that has changed — the food app has been a stand-alone since 2013. The company also offers smaller stand-alone apps for specific holiday recipes.

Basil ($2.99, iOS) is a strong option for iPad users who want to clip and organize recipes by ingredient. The app turns your iPad into a cookbook with benefits; for example, cook times are converted into timer buttons so you can keep track of your progress as you complete the recipe.

Ever come across a weird vegetable in the produce section or at the farmers market and been too intimidated to even consider cooking with it? If so, the Specialty Produce app (free, iOS, Android) is your friend. This app is essentially a dictionary of ingredients, both familiar (apples, avocado) and exotic (bilva fruit, gingko nuts). Each entry includes information on taste, preparation, history and seasonality, plus links to recipes.

Another option is an app that doesn't scour the Web for recipes, but might spur a few more Meatless Mondays: Mark Bittman's extensive cookbook "How to Cook Everything Vegetarian" (Houghton Mifflin Harcourt, 2007) is now in app form. And with 2,000 recipe choices, you probably won't miss being able to add your own. The How to Cook Everything Vegetarian app ($9.99, iOS) is best accessed on an iPad, because that version has a fuller suite of features (a notes section and illustrated tutorials) than the iPhone version. This digital cookbook doesn't require an Internet connection to work, though, and it's a boon for vegetarians who might be frustrated by all the recipes they can't use on typical cooking apps. The one-time cash outlay buys not only a cookbook, but also a grocery-list widget, search options and a weekly new featured recipe.