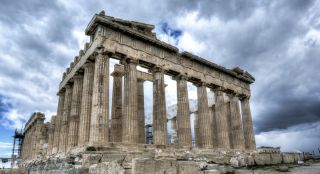 New research indicates millions of silver coins, the reserves of ancient Athens, were once kept in the attic of the Parthenon (shown here as it appears today).
(Image: © Anastasios71 / Shutterstock.com)

Millions of silver coins may have been stored in the attic of the Parthenon,one of the most famous structures from the ancient world, a research team says.

The attic of the Parthenon is now destroyed and the coins would have been spent in ancient times. The researchers made the discovery by reconstructing the size of the attic, analyzing ancient records to extrapolate how large the reserves may have been and re-examining archaeological work carried out decades ago.

Their evidence suggests that millions of coins made up the cash reserves of the city-state of Athens and much of this hoard was stored in the attic of the Parthenon. During the fifth century B.C., when the Parthenon was built, Athens was a wealthy city-state whose people erected fantastic buildings and fought a series of devastating wars against their rival Sparta. This vast reserve of coins would have helped fund those endeavors. [In Photos: Amazing Ruins of the Ancient World]

While the Parthenon's attic is now destroyed, researchers estimate its floor would have spanned an area more than three times that of a tennis court, with dimensions of 62 feet wide by 164 feet long (19 by 50 meters) and about 10 feet (3 m) high at the center. The coin reserves were likely placed there around 434 B.C., when the Parthenon was dedicated to Athena, the patron goddess of Athens.

In the fifth century B.C., Athens was one of the richest and most powerful city-states in Greece. Boasting a large navy, it exacted tribute from other Greek cities in exchange for military protection. Ancient writers say the Athenians kept vast coin reserves on the Acropolis, but don't say exactly where.

For instance, one decree dated to around 433 B.C. refers to "3,000 talents" being transferred to the Acropolis for safekeeping, a colossal sum of money, researchers say. The highest-denomination coin minted in Athens at the time was a silver tetradrachm, and it took 1,500 tetradrachms to make one talent, the researchers noted. This means the "3,000 talents" mentioned in the decree would be worth 4.5 million tetradrachms. Such a huge number of coins would have weighed about 78 metric tons, or nearly 172,000 lbs., researchers say. To put that in perspective, that's heavier than the M1 Abrams battle tank used today by American soldiers.

Researchers caution that Athens may have minted some of its coins in gold (which was worth about 14 times more than silver). If that were the case, the number of coins (and the overall weight of the reserves) would be somewhat less, since it takes fewer gold coins to form one talent.

"Gold coinage was always minimal in Athens, in part because Athens mined silver locally," study researcher Spencer Pope, a professor at McMaster University in Hamilton, Canada, told Live Science in an email. As such, the ancient writer Aeschylus called Athens and its nearby area a "fountain of silver," Pope added.

Ancient records mention nothing about where on the Acropolis the coins were stored, nor do they reveal the purpose of the Parthenon's attic. "The sources are silent on the use of this space," said Pope at a presentation recently in Toronto during the annual meeting of the Classical Association of Canada.

However, there are several reasons why researchers believe the attic was used to store most of Athens' immense coin wealth. [Photos: Mysterious Tomb from Ancient Greece]

While the attic is now virtually destroyed, the remains of a staircase that would've led up to the attic still survive. This staircase appears to have had a utilitarian rather than a ceremonial use, suggesting it could have been used to bring coins to and from the attic.

Additionally, the sheer floor size of the attic not only would have provided room to store the coins, but also would have meant the coins' weight could be spread over a wide area. Assuming the attic was floored with thick cypress wood beams, it would have been able to support the weight of the coins, the researchers say.

Because the Parthenon was located centrally, people would've had an easier time securing and accessing the money there. And criminals would be less likely to steal the coins, as the Parthenon was a temple for Athena — meaning any theft from it would be considered a crime against the goddess.

"The attic of the Parthenon is the only suitable space large enough to hold all of the coins in the Treasury," Pope said in an email. "While we cannot rule out the possibility that coins were distributed across numerous buildings, we should recall that the attic is the most secure space."

Researchers say that the coins may have been stored in boxes whose dimensions could be standardized to make counting easier.

Pope co-wrote the scientific paper with Peter Schultz, a professor at Concordia College at Minnesota, and David Scahill, a researcher at the American School of Classical Studies at Athens.