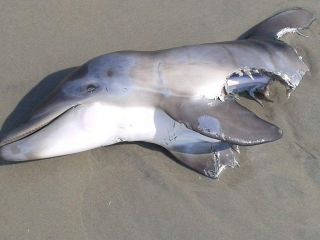 A beachgoer snapped this photo of a baby dolphin that washed ashore in Wildwood, New Jersey over the weekend.
(Image: © Karissa Kerns, Courtesy of Marine Mammal Stranding Center)

A Philadelphia woman captured a shocking photo of a half-eaten baby dolphin while visiting the beach in Wildwood, New Jersey, last Saturday (June 13). The photo of the newborn animal's decimated carcass — allegedly rendered that way by sharks — was posted to Facebook and has since gone viral.

Many people who saw the photo concluded that the Jersey shore is no longer a safe place for dolphins. But don't pack up your beach gear just yet. [How to Avoid a Shark Attack]

"It's not uncommon for anything that washes up onshore to have been bitten by sharks. This is what sharks do. They clean the ocean of debris," said Schoelkopf, who has worked with marine mammals for 40 years. He maintains a large photo database of animals that died of unknown causes and then washed onto the beach after being partially eaten by sharks.

Of course, Schoelkopf admitted it's possible that sharks did, in fact, kill the baby dolphin; he just thinks it's unlikely. But Daniel Abel, a professor of marine science at Coastal Carolina University in Conway, South Carolina, said it may be difficult to figure out what really happened.

"Either explanation is possible," Abel told Live Science. "A shark could easily eat an animal of that size. And [a shark] could have eaten a dead animal as well."

While humans generally think of sharks as hunters, these animals are actually not that picky about whether their prey is alive or dead (as long as that prey hasn't been dead for very long), Abel noted. For example, great white sharks have been known to eat dead whales, even though these fearsome predators are quite adept at going after large prey that's still alive.

"The name of the game in evolution is saving energy," Abel said. "[You] could be on the way to lunch, but if there's a free buffet in front of you, you'll stop and eat."

It's possible that a small great white shark fed on the baby dolphin, Abel said. But Schoelkopf said he suspects a smaller shark species was responsible for the mutilated dolphin carcass.

"Because of its location so close to shore, there's a possibility it may have been a sand tiger [shark], since they frequent shallow waters," Schoelkopf said. "We've had other dolphins come in with similar bites that were from sand tigers."

However, there are at least seven other species of shark (besides sand tigers and great whites) that inhabit the waters just off the New Jersey coast, so finding out precisely which species chowed down on the dolphin requires further investigation, Schoelkopf said. The Marine Mammal Stranding Center is trying to figure out the animal's cause of death and, if possible, what kind of shark snacked on it.

Abel said this one dolphin death doesn't make the sea a more dangerous place than it was last week. However, last week the ocean did seem like a fairly dangerous place. On Thursday (June 11), a shark attacked a young woman off the coast of North Carolina. And on Sunday (June 14) two other young people were victims of separate shark attacks along the same stretch of coast.

Still, you shouldn't let your fear of sharing the baby dolphin's fate keep you from enjoying the ocean this summer, Abel said.

"There's a very active food web that's invisible to us operating all the time," he said. "We don't like to think of cute, little marine mammals being consumed by big, mean sharks. But it happens all the time, and it doesn't make the ocean any scarier or less safe than it was before it happened."