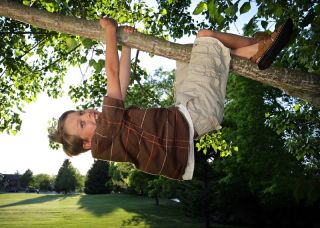 Do you know exactly where your kids are? No?

That may be a good thing.

Kids who engage in thrilling, risky activities, such as roaming far from home, may be healthier, both psychologically and physically, according to a new analysis of existing research.

The risky activities could include iconic childhood pursuits like climbing a tree, sledding down an icy hill, play-fighting and even venturing through a wooded area and getting a little lost.

The analysis also found no evidence of increased injuries or psychological harm from seemingly risky activities, she added. [The Top 5 Benefits of Play]

Children are living more constrained lives than previous generations, and fewer are left alone to wander and get up to shenanigans as their parents did, said Tim Gill, a childhood researcher and the author of "No Fear: Growing Up in A Risk Averse Society" (Calouste Gulbenkian Foundation, 2007). The trend away from so-called "free-range parenting" toward more protective parenting started in the 1990s, and has only ramped up since then, said Gill, who was not involved in the current study.

But shielding children from perceived immediate dangers, such as being snatched up by a stranger, can lead to problems down the road, Gill said. For instance, with fewer opportunities to roam, kids are less active than they used to be, and obesity rates are rising, he said. And some studies suggest overprotected kids are less mentally resilient when facing ordinary life challenges when they do leave the nest, he added.

To quantify the harms and benefits of all this risk taking, Brussoni and her colleagues pored over the scientific literature. From an initial pool of about 2,100 relevant studies, the researchers identified 21 good-quality studies. Overall, none found negative effects of risky play, and most found evidence that kids who engaged in these "risky" adventures were more active, more confident or more psychologically healthy, according to the new analysis, which was published in the June issue of the International Journal of Environmental Research and Public Health.

The team defined risky activities as play at heights; use of potentially dangerous tools; high-speed activities; play with dangerous substances like fire or water; activities that involved the possibility of getting lost; and rough-and-tumble play such as wrestling or play-fighting. [9 Weird Ways Kids Can Get Hurt]

"When you talk to kids about it, it's a kind of scary, funny feeling where you're kind of pushing yourself before you lose control, but it's exhilarating," Brussoni told Live Science.

The study was somewhat limited because it included a wide range of activity types, and most of the research was observational, meaning scientists simply assessed health differences among the kids who were engaged in risky play. So it's possible underlying differences, not the daredevil activities themselves, could have led to different health outcomes, Brussoni said.

But in a few studies this team analyzed, the researchers on those studies had randomly assigned children either to more or less freewheeling play. For instance, in one Australian study, children were told either to play in a traditional playground or to explore a junkyard-type space filled with tarps, crates and old tires — "things that had no obvious play value, that weren't meant to be toys, so the kids could stamp their own imagination onto them," Brussoni said.

Kids who got to tromp around the junkyard became more active, whereas the children playing in a more traditional space moved less over the course of the year, she said.

It's not clear exactly why risky play could be good for kids, but Brussoni has some theories. [10 Scientific Tips for Raising Happy Children]

"You can imagine that, if you get to explore with your own body — what you can do with it and how the world works — that's much more instructive than being told by someone, for example, 'If you fall out of a tree, that's going to hurt,'" Brussoni said. "You know how far you can push your own body."

On the flipside, kids who are micromanaged may be getting the message that "there are lots of dangers in the world; you don't trust me to be able to keep myself safe or manage myself in this world, and I need you to keep me safe," she said.

Still, the study really only applies to risky play within reasonable bounds, said Michael Ungar, a psychology professor at Dalhousie University in Halifax, Canada, who was not involved in the study. Dealing wtih manageable risk is good for kids, but that means parents must assess a child's developmental stage, maturity level, and the context in which the risky play is occuring, he added.

Letting a child wander doesn't mean giving them carte blanche to go anywhere or do anything, he said. "Are we talking about dropping your 6-year-old in the middle of the Canadian Arctic and saying 'Okay find your way home?' You're not. What you're talking about is a little treed area that's bounded by four streets," Ungar said.

And though it may seem counterintuitive that children given more leeway don't seem to experience more injuries, other work has found similar trends, Ungar said. If a child feels confident enough to get up high, that's probably because they feel confident at that height and probably aren't going to fall, he said. Meanwhile, kids may become more reckless or be less in tune with their internal limits if they feel a parent or external force is ensuring their safety. For instance, children tend to have more accidents when they put on helmets, Ungar said. (Kids should still wear helmets when biking, skiing or scooting, because helmets still reduce the risk of serious head injury and death, he added).

But the days when most parents turned their kids out of the house to play until dinner are long gone, and that trend can't be blamed solely on individual parenting choices, he added. Urban sprawl, car-centric cities with speedy traffic, parents who work long hours and a lack of neighborhood cohesion may all conspire to make the streets seem less safe, Gill said.

And government authorities may also reinforce the logic of corralling kids indoors, he added. For instance, earlier this year, a Maryland family was investigated by Child Protective Services after letting their 10-year-old and 6-year-old walk home alone, and a South Carolina woman who let her 9-year-old child play alone in a park was charged with felony child neglect in 2014. Those national headlines can have a chilling effect and deter parents from turning kids loose as they otherwise might, Gill said.

Still, a critical mass of people, such as those in the free-range parenting movement, are beginning to reject overprotection as a parenting strategy, and they are putting pressure on government agencies to change their policies, he said.