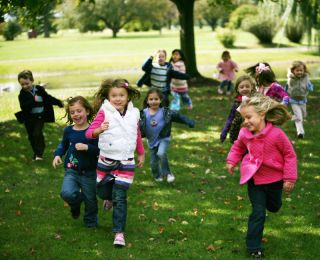 To be healthy, adults should take 10,000 steps per day — or at least that's the popular notion.

For kids, though, the picture is fuzzier. Research on children has lagged behind that of adults, and most common devices that can track a daily step count, such as pedometers and fitness trackers, have not been designed with little ones in mind.

But in the face of high childhood obesity rates — and with the advent of increasingly sophisticated fitness trackers, step counters and other devices — more scientists are trying to determine just how many steps little ones should take to stay active.

"We recommend that kids get 60 minutes a day of moderate to vigorous physical activity" daily, and it's fine if children's activity is broken up throughout the day, said Dr. Stephen Daniels, the pediatrician in chief at the Children's Hospital Colorado in Denver. But translating that into a number of steps is difficult.

"For preschoolers, many public health organizations suggest about 3 hours of physical activity at any level," Daniels said. But before any guidelines on a step count can gain widespread acceptance, scientists need to figure out a way to reliably translate the sometimes-toddling, sometimes-boisterous activity of preschoolers into an ideal step count.

Researchers are beginning to see advantages to giving people a step count to aim for, rather than traditional activity guidelines, which often recommend how much time people should spend exercising. Step counts have the advantage of being potentially less confusing and subjective than recommendations for "moderate to vigorous physical activity." [The Best Pedometers of 2014]

In addition, children tend to get their activity in short bursts, according to a 2007 paper in the Journal of Sports Medicine. And pedometers that can unobtrusively track steps throughout the day could theoretically add up these short stints of activity better than self-reporting could, the researchers hypothesized.

Adult guidelines, such as the now-well-known recommendation to take 10,000 steps a day, don't translate to children. In early attempts to measure children's step counts, researchers simply tracked children and then assumed that the norm was the ideal, said Timothy Brusseau, a sports physiologist at the University of Utah.

But there are problems — boys consistently log more steps than girls, and overall, kids are less active than they should be, Brusseau said. Children also tend to log more activity at school (especially during recess and physical education class), and during the weekdays in general, than on weekends, Brusseau has found. But none of these patterns indicates what the ideal activity pattern is for youngsters' health.

As a result, newer approaches to measuring kids' activity involve measuring kids activity levels with accelerometers, and then calculating out a step count based on the data, Brusseau said.

It's even tougher to count steps in the littlest kids, who toddle, move back and forth erratically, and generally have more ambiguous movements to track.

In a study in the January 2015 issue of the journal Preventive Medicine, researchers tracked the activity level and steps of 916 preschool-age kids in Portugal by having the kids wear accelerometers. They found that 3 hours of physical activity translated roughly to about 9,099 steps per day, and concluded that children who take fewer steps may be considered "insufficiently active."

In another study, published Dec. 23 in the Journal of Sports Science, researchers looked at 535 Flemish preschoolers and found that 180 minutes of physical activity per day could translate to anywhere from 4,653 steps per day to 13,326 steps per day, depending on how output from the accelerometer was measured.

The researchers noted that kids are more likely than adults to lose, remove or just not wear their fitness trackers.

However a child's activity is measured, it's important for parents to nurture a healthy, active lifestyle early on in children, Brusseau told Live Science.

Most kids are as active as they'll ever be in elementary school, and their activity level slowly declines until they reach adulthood. Therefore, making sure they're getting in enough activity from the get-go is a good way to ensure they stay healthy as they grow, Brusseau said.