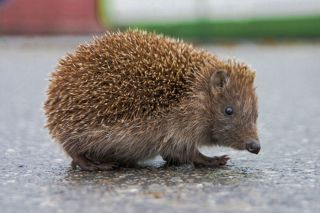 Hedgehogs are small mammals with cone-shaped faces, short legs and bodies that are covered with porcupine-like quills. Despite their similar appearances, porcupines and hedgehogs are not closely related.

When in danger, the hedgehog rolls into a ball so that the quills cover the entire area of their exposed body and protects the animal from predators, according to National Geographic. Once they are in a ball, they must stay still. It is a myth that they can roll while curled into a ball.

Hedgehogs can be found in Europe, Asia, Africa and New Zealand, according to National Geographic. They can live in a wide range of habitats, including savannas, forests, deserts, scrublands and suburban gardens.

Hedgehog homes are usually burrows and nests they build themselves. Hedgehog burrows can be up to 20 inches (50 cm) deep, according to the San Diego Zoo, and nests are made from leaves, branches and other vegetation. Sometimes, hedgehogs take over burrows that other animals have left behind or nestle between rocks.

Hedgehogs are solitary creatures that are big sleepers and can sleep up to 18 hours per day, according to Animal Planet. They are also nocturnal, which means they sleep during the day. This can make them poor pet choices for someone that wants and active pet during daytime hours.

They use sleep to protect themselves from extreme climates in addition to just getting rest. Hedgehogs hibernate in cold climates, and they sleep through times of heat and drought in deserts. This process of sleeping during heat and drought is called aestivation. In areas where there aren't extreme climates, hedgehogs are active and have normal sleep cycles, according to National Geographic.

Hedgehogs are named for the way they eat, according to National Geographic. They root underneath hedges and other vegetation, making snorting noises like a hog. During this activity, they find meals of fruit, fungi, centipedes, insects, snails, worms, mice, frogs, eggs, birds, frogs, reptiles, roots and snakes. According to the AWF, hedgehogs can eat one-third of their body weights in just one night.

Hedgehogs only give birth once per year after a gestation of four to six weeks. Their litters usually consist of four to seven young at one time. Each baby hedgehog, called a hoglet or piglet, weighs less that 1 ounce (3 to 25 g) at birth.

Typically, the mother protects her piglets from predators as even the father may try to eat the young. Sometimes, if the nest is disturbed, the mother may even become the predator and will eat her young.

After four to seven weeks, piglets are on their own. At nine to 11 months they are fully mature and will live three to eight years in the wild or up to 10 years in captivity, according to the San Diego Zoo.

The taxonomy of hedgehogs, according to the Integrated Taxonomic Information System, is:

According to the International Union for Conservation of Nature (IUCN), hedgehogs are not endangered and are labeled as "least concern." This label means that an animal's population is growing and is not threatened.

Owning a hedgehog is prohibited in Alabama, California, Georgia, Hawaii, Maine, Pennsylvania and Vermont, according to Millermeade Farms, a hedgehog breeder, while ownership is restricted in Arizona, New Jersey and Oregon. According to Animal Planet, owning a hedgehog is also illegal in Washington, D.C., and New York City.