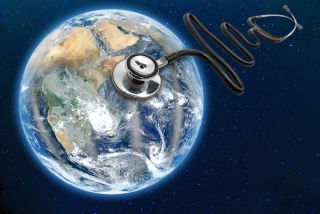 If you're in perfect health, you're in the minority: Less than 5 percent of people worldwide had no health problems in 2013, a new study finds.

Researchers analyzed information on about 300 diseases and conditions — everything from acne and PMS to chronic conditions such as heart disease and diabetes — and more than 2,300 disease-related consequences, in people in 188 countries.

Overall, just 4.3 percent of people had no health problems, the researchers found. The likelihood of having any disease or condition increased with age: In developed countries, about 64 percent of kids under age 5 had a health problem in 2013, compared with 99.97 percent of adults ages 80 and older.

Some conditions affected more than 10 percent of the world's population, including cavities in permanent teeth, tension headaches, iron-deficiency anemia, hearing loss and genital herpes. In 2013, there were also more than 18 billion cases of upper respiratory infections (a category that includes sinus infections and the common cold), and more than 2 billion cases of diarrhea diseases.

The study also found that, over the last two decades, the total number of years that people in the world are living in less than perfect health increased. This increase was mainly due to the population growing larger and getting older, the researchers said.

Some of the leading causes of disability worldwide were low back pain, major depression, neck pain, migraine, diabetes and anxiety disorders. People are also living longer with conditions such diabetes, Alzheimer's disease and arthritis, the researchers said.

The researchers noted that although public health efforts have focused on reducing deaths, it is important to pay attention to the increasing health toll from disability.

"Large, preventable causes of health loss, particularly serious musculoskeletal disorders and mental and behavioral disorders, have not received the attention that they deserve," study co-authorTheo Vos, a professor of global health at the University of Washington's Institute of Health Metrics and Evaluation in Seattle, said in a statement. "Addressing these issues will require a shift in health priorities around the world, not just to keep people alive into old age, but also to keep them healthy."

The study was funded by the Bill & Melinda Gates Foundation.