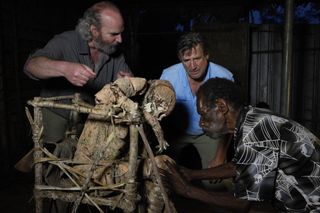 In 2008, researchers helped villagers in Papua New Guinea restore the mummified remains of a former shaman and warrior named Moimango. Here, Andrew Nelson (left) and Ronald Beckett (center) stand behind the smoked mummy of Moimango as his son Gemtasu looks on.
(Image: © Reproduced with permission from The Anatomical Record 298(6), June 2015: Special Issue The Anatomy of the Mummy)

The smoked mummy of a village chief in Papua New Guinea has gotten a makeover, helping members of his clan connect with his spirit in the "ghost world."

The mummy, also a former shaman and warrior named Moimango, was lashed by the elements over the past several decades, causing his body to deteriorate. But scientists were able to restore Moimango's body using materials from the jungle.

The researchers also learned exactly how the smoked mummies were made, said study co-author Ronald Beckett, a professor emeritus and bioanthropologist at Quinnipiac University in Connecticut. [See Images of the Smoked Mummies of Papua New Guinea]

High above the village of Koke, on a cliff sheltered by a small overhang, sit the mummified bodies of several deceased members of the Anga clan. The village, in the Aseki region of Papua New Guinea, lies in a remote area between the highlands, which have seen an influx of foreigners due to gold mining, and the coast, which has contact with the outside world through its ports.

Beckett first learned about the mummies from photojournalist Ulla Lohmann, who had visited Koke several times. The clan leader, a man named Gemtasu, wanted to improve the condition of the remains of his father Moimango, who was mummified in the 1950s. Gemtasu hoped that by restoring his father's body, he could also revive the cultural practice of smoking mummies, which missionaries had discouraged for decades.

Mummies mark the Anga's territory. Relatives such as Gemtasu often consulted with departed loved ones for advice and included them in celebrations. The ability to see the face of the departed loved one was critical to this process, Beckett said.

According to the Anga, great people whose bodies are not taken care of will roam the jungle as spirits and potentially sabotage hunting or crops, Beckett told Live Science.

"The ghost world — that's a very, very real thing to them," Beckett said.

The years had not been kind to Moimango. He had a dislodged jaw and a drooping head in danger of completely falling off. Lichens had also infiltrated the body, and at one point, a rodent had burrowed into Moimango's side, making a nest inside, Beckett said.

Beckett and his colleague Andrew Nelson of the University of Western Ontario in Canada wanted the Anga to be able to maintain the restorations themselves. So, in 2008, the team arrived and asked villagers to identify suitable restoration materials from the jungle.

"I went to Papua New Guinea with practically nothing other than some examination tools," Beckett told Live Science.

The team used bark cloth called tapa to patch and support body parts, such as the jaw and the head, and heated sap from the kumaka tree to use as glue. The team killed the lichens permeating Moimango with a lime-based substance called suca made from crushed shells, which has the same pH as bleach. They also touched up the ocher clay on the body, and restored some of the other mummies on the cliff.

Two years later, when the team returned, Moimango was still in good condition and the lichen had not grown back.

The team also mummified a forest pig to understand how the smoking process worked.

Finally, villagers slathered the bodies with ocher, a claylike form of iron oxide, which further wicked moisture from the body and created a capsule to protect the mummifying remains from the elements.

Even in the sweltering conditions of Papua New Guinea, which normally accelerate the decomposition of corpses, the process worked remarkably well, Beckett said. The smoke makes a hostile environment for bacteria and prevents insects from laying eggs in the body. Arsenic in the smoke also acts as a preservative, Beckett said.

Though the process may seem strange to those unfamiliar with it, the spiritual belief underlying it — that the physical remains of the dead person are a way to communicate with them — isn't all that different from Western mourners leaving flowers on the grave of a loved one or going to a cemetery to talk to their deceased relatives, Beckett said.

The restoration of Moimango was described in a study published today (May 22) in the journal Anatomical Record.