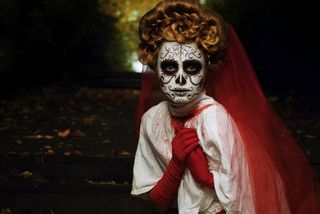 This Halloween, be scared for the right reasons.
(Image: © Val Shevchenko, Shutterstock)

It's almost Halloween — a time when ghouls, ghosts and goblins are said to roam the landscape and the barrier between the living and the dead becomes permeable.

But though Halloween and its trick-or-treating traditions have gone global, almost every culture has its share of homegrown spirits and frights. From the flesh-hungry demons that terrify in Native American culture to the Frankenstein-like creatures formed from Earth in Jewish lore, here are five spooky spirit traditions from around the world.

All Hallows' Eve takes place in Western countries around the world on Oct. 31. The tradition is now linked to the Nov. 1 Christian holiday of All Saint's Day, in which people pray for the souls of departed loved ones. But many believe the roots of the holiday come from Celtic harvest festivals, most notably Samhain, which marked the beginning of the Celtic New Year. During Samhain the barrier between the spirit world and the ordinary one was said to be especially thin, allowing fairies and other spirits to wreak havoc on crops and livestock if not placated with offerings and treats. The souls of dead relatives were also said to revisit their old homes, so a place would be set for them at the dinner table. [13 Halloween Superstitions and Traditions Explained]

In traditional Chinese culture, the seventh month of the Chinese calendar is Ghost month, a time when spirits and ghosts emerge from the lower realms. On the 15th day of the month (this year it occurred in August), the dead are supposed to visit the living. The spirits roaming the streets are said to have been neglected by their kin and therefore have long, needle-thin necks due to starvation.

Because the gates of both heaven and hell are open, so the legend goes, living relatives perform Buddhist or Taoist rituals to wash away the suffering of the dead. In countries such as Hong Kong and Taiwan, residents will make colorful paper incense sticks in the shape of dragons, burn fake hell currency and offer various paper goods to their ancestors.

Throughout Central America, families gather in cemeteries on Oct. 31 and Nov. 1 to honor the dead. But in Sumpango, Guatemala, people also create elaborate, giant kites of paper or bamboo, some of which can be 20 feet (6 meters) across. On All Saint's Day, people go to a huge hill overlooking the biggest cemetery in town and release the kites. The kites are then ripped to shreds by high winds, symbolizing the cycle of life and death.

In Native American culture, cannibalism was associated with inviting malevolent spirits into your body. Algonquin-speaking tribes feared the so-called windigo, a demonic creature that may take possession of someone's body. The windigos were said to stalk during winter and times of famine. People could essentially invite the windigo into them by partaking in cannibalism, or the evil spirits could enter their bodies during a dream.

In Jewish lore, human beings can invoke a Frankenstein-like monster called a golem into existence by fashioning a body out of Earth and then walking around it while either reciting the letters that form the secret name of God or writing the Hebrew letters for truth on its forehead. According to Jewish tradition, Adam, the first human being, was a golem, without a soul, for the first few hours of his existence. To destroy the golem, the creator would either walk backward and recite the letters of God's name backward, or erase the letters on its forehead. In some legends, Jews in 16th-century Prague created a golem to fight off anti-Semitic attacks.