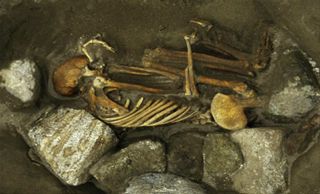 Mummies found off the coast of Scotland are Frankenstein-like composites of several corpses, researchers say.

This mixing of remains was perhaps designed to combine different ancestries into a single lineage, archaeologists speculated.

The bodies were first unearthed in 2001 during excavations beneath the foundations of an approximately 3,000-year-old house on South Uist, an island in the Outer Hebrides off the west coast of Scotland. The building was one of three roundhouses at Cladh Hallan, a prehistoric village named after a nearby modern graveyard. The site was once populated in the Bronze Age from 2200 B.C. to 800 B.C. — scientists were digging here to learn more about this era in Britain, where little was known until recently.

The researchers had found what were apparently the remains of a teenage girl and a 3-year-old child at the site. However, two other bodies looked especially strange — those of a man and a woman found in tight fetal positions as if they had been tightly wrapped up, reminiscent of "mummy bundles" seen in South America and other parts of the world. These bodies were apparently mummified on purpose, the first evidence of deliberate mummification in the ancient Old World outside of Egypt. [8 Grisly Archaeological Discoveries]

Evidence of this mummification lies in how all the bones in both these bodies were still "articulated" or in the same positions as they were in life, revealing that sinew and perhaps skin were still holding them together when they were buried. Carbon dating these remains and their surroundings revealed these bodies were buried up to 600 years after death — to keep bodies from rotting to pieces after such a long time, they must have been intentionally preserved, unlike the bodies of animals also buried at the site, which had been left to decay.

Mineral alterations of the outer layer of the bones suggest they were entombed in acidic surroundings, such as those found in nearby peat bogs. Exposures to such bogs for a year or so would have mummified them, stopping microbes from decomposing the bodies by essentially tanning them in much the same way that animal skin is turned into leather.

Ancient writings suggest that embalming was practiced in prehistoric Europe, not just in Egypt. For instance, ancient Greek philosopher Poseidonius, writing in about 100 B.C., "visited Gaul and recorded that the Celts there embalmed the heads of their victims in cedar oil and kept them in chests," said researcher Mike Parker-Pearson, an archaeologist at the University of Sheffield in England.

Bizarrely, the man's remains were composed of bones from three different people, possessing the torso and limbs of one man, the skull and neck of another, and the lower jaw from a third, possibly a woman.

The researchers made this discovery of his Frankenstein-like nature by analyzing his skeleton — for instance, evidence of arthritis was seen on the vertebrae of the neck, but not on the rest of the spine, revealing these parts came from different bodies. Also, the lower jaw had all its teeth, whereas those of the upper jaw were entirely missing, and the condition of the lower jaw's teeth revealed they once interacted with a full set of teeth in his upper jaw, showing they originally belonged to another man. [Image Gallery: Scanning Mummies for Disease]

To see if the woman's skeleton was also a composite, the researchers analyzed ancient DNA from the skull, lower jaw, right upper arm and right thighbone. This revealed that the lower jaw, arm bone and thighbone all came from different people. Data from the skull was inconclusive. (Oddly, the upper two teeth next to her front teeth had been removed and placed in each hand.)

Although one Frankenstein-like mix-up of body parts might be an accident, "the second instance makes this unlikely," Parker-Pearson said.

Mummification apparently took off in Britain about 1500 B.C. "at a time when land ownership — communal rather than private, most likely — was being marked by the construction of large-scale field systems," Parker-Pearson told LiveScience. "Rights to land would have depended on ancestral claims, so perhaps having the ancestors around 'in the flesh' was their prehistoric equivalent of a legal document."

"Merging different body parts of ancestors into a single person could represent the merging of different families and their lines of descent," Parker-Pearson said. "Perhaps this was a prelude to building the row of houses in which numerous different families are likely to have lived."

When the bones were first discovered, Parker-Pearson admitted, "some archaeologists were rightly skeptical," as mummification in the British Bronze Age was pretty much unheard of.

Even Parker-Pearson would've been skeptical of the finding, had he not studied the bones. "But since then, we have applied a battery of scientific methods, of which the ancient DNA analysis is the latest," he said. "Together with archaeological evidence from excavation, these analytical results make a fairly unassailable case for mummification and recombination."

"I don't think it implies any links with ancient Egypt or other distant civilizations at all," Parker-Pearson said about these findings. "Mummification is simple enough to do in your own kitchen, and has been surprisingly widespread among small-scale, traditional societies throughout the world in recent centuries."

In fact, he added, the idea that Egyptian practices of mummification diffused elsewhere was discredited more than 50 years ago.

"Altogether, these results have completely changed our ideas about treatment of the dead in prehistoric Britain," Parker-Pearson said. "Other archaeologists are now identifying similar examples now that the breakthrough has been made — beforehand, it was just unthinkable."

For instance, he said, what may be two examples of human mummies from Down Farm in Dorset, excavated by Martin Green in 2009, even have drill holes in the long bones, suggesting that their limbs were strung together.

The scientists detailed their findings in the August issue of the Journal of Archaeological Science.