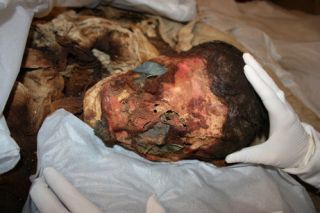 This male mummy, with metal plates placed over his eyes, was found in the ancient Peruvian town of Rontoy in June 2008.
(Image: © Kit Nelson/Tulane University)

A bundle bearing a mummy has been found in Peru's historic Huaura Valley. The mummy is thought to have been an elite member of the Chancay culture, a civilization that thrived in the central coast of Peru from about A.D. 1000 to 1400.

The territory of the Chancay was later home to the Incas, who formed what became the largest pre-Columbian empire in America.

Tulane University anthropologist Kit Nelson is the co-director of a team that is in the process of unraveling the mummy. The mummy was found in the center of a tomb located within a large adobe walled compound. In addition to the mummy, the tomb contained several offerings, including whole vessels, a bag of fruit and other goods.

The individual was wrapped in layers of textiles and several offerings were placed within the layers. The offerings included balls of different colors of cotton, ground corn and corncobs, a bag with metal and a bag with some type of plant material. The individual was a male, about 30 to 45 years old. He was dressed in two tunics and a loincloth. Around his knees and his waist were slingshots.

Nelson and her fellow researchers, including two physical anthropologists, a textile specialist, a metals expert and a pathologist, have been painstakingly rolling back layer upon layer of textile and documenting the original preparation of the body and the associated offerings. Their work on the mummy should be completed by November after which the mummy and its objects will be prepared for an exhibition in Lima.

During the period in which the mummy lived, the central coast of Peru was marked by the formation of regional powers after the collapse of the large empires of the Middle Horizon period (A.D. 600). Two empires expanded through this area during this time of regional reorganization, the Chimu and later the Inca.

Through this period of unrest and imperialism, the Huaura Valley maintained internal cohesion, visible in the continuation of regional style architecture, artifacts and art styles. This Chancay tomb, the only one excavated and scientifically examined, will shed light on the local social structure and the interaction of the Chancay with the other major powers during this period.

Nelson's work was funded by Tulane and a grant from National Geographic's Committee for Research and Exploration.