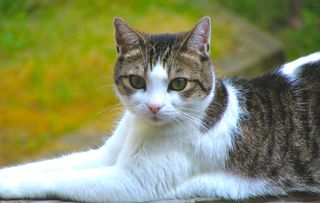 Every person carries trillions of bacteria in his or her gut. But what about humans' closest companions?

Four enterprising biologists plan to find out. Their citizen-science project will examine the microbiome of cats' digestive systems, in both house pets and wild animals. The microbiome is the bacteria and other microorganisms we carry on our bodies.

"Like us, animals are enveloped in a cloud of microbes," said Holly Ganz, a research scientist at the University of California, Davis, who studies the microbiome of cats and is part of the Kickstarter-funded project. "We're really interested in them because they influence health and behavior."

Not much is known about the critters that grow inside our feline companions. Yet, just like in humans, the microbes inside cats play an active role in their health, helping digestion, influencing their immune system and, perhaps, swaying the development of obesity, diabetes and irritable bowel disease, Ganz said. "The gut microbiome is really important, and it's also very diverse and complicated," she told Live Science. [Images: See the World from a Cat's Eyes]

One of the few studies of feline microbiomes found different gut bacteria among kittens on high-protein and moderate-protein, moderate-carbohydrate diets. True carnivores, cats are healthiest on high-protein diets, but many commercial cat-food brands skew toward a more carb-heavy ratio. The study was published online Aug. 31, 2012, in the British Journal of Nutrition.

However, because this is the first project to look at the feline microbiome in such detail, Ganz and her fellow cat-loving researchers simply plan to report what they find in their kitties. Even so, the observations could have practical applications for pet owners, because the team will be comparing feral, domestic and shelter cats.

In humans, studies have discovered different communities of gut bacteria in different European populations. In the future, as they gather more cat microbiomes, the team can start to question how different diets and environments affect cats, and whether the cat microbiome changes with age, Ganz said. Each individual has a unique microbiome.

The idea of a kitty Kickstarter started as a joke, but the idea took off because it seemed like the perfect citizen-science project, according to Jonathan Eisen, a UC Davis professor on the science team. Crowdfunding also solves the problem of finding funding, because the researchers' grant applications to science agencies have been turned down so far, Ganz said. "The money for studying companion animals is devoted to pressing things, like cancer," she said.

The "kittybiome" Kickstarter has already hit its minimum funding goal, but there are still open spots if you're interested in seeing what lives inside your cat's intestines. (Full disclosure: I'm also a backer.)

For a pet to participate, curious humans must collect a small, fresh poop sample from their cat companions and send it in to the scientists for analysis. (What cat owner doesn't already get up close and personal with their animal's fecal waste?) In return, people will receive information about the different species in their cat's poop, as well as a layperson's guide that helps explain what it all means. "We want to make it interesting to people," Ganz said.

For the squeamish or those without cats, there's also a chance to sponsor a wild cat or a shelter cat from the Vancouver Orphan Kitten Rescue Association. Ganz already has some 150 fecal samples from wild cats in Africa, such as cheetahs and lions, from her ongoing research there.

The researchers intend to let Kickstarter backers compare results by location, so a cat owner in California could look at results from Canada and South Africa. They've also signed up celebrity cat Lil Bub, and hope Grumpy Cat will send in some poop, too.

"We're committed to studying the cat microbiome for the next 10 years," Ganz said. "And we can all have a little bit of fun with it."