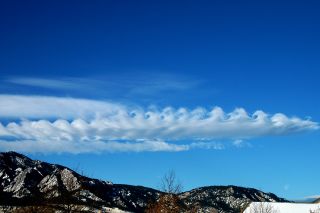 Surf's up more than 2 miles under the sea, where ice-cold waves as tall as skyscrapers tumble over an underwater "waterfall."

Yet the ocean surface is calm, and a tropical sun bakes scientists aboard a research ship moored between South America and Africa just south of the equator. Without the network of sensors dangling below, no one would ever know of the tremendous currents rushing through a narrow mountain pass on the seafloor.

In this turbulent underwater canyon, nearly 15,000 feet (4,550 meters) below the surface, the scientists spotted a set of more than 250 consecutive crashing waves, similar to surfer's waves. It's the longest train of these special billows, called Kelvin-Helmholtz waves, ever seen in the sea, said lead study author Hans van Haren, an oceanographer at the NIOZ Royal Netherlands Institute for Sea Research in Den Burg, Netherlands.

"In the deep ocean, there can be vigorous mixing processes, but if you look for these waves at the surface, they generate only a ripple. You don't notice them," van Haren told Live Science.

The canyon is one of the only passes through an underwater mountain range that blocks deep-ocean currents flowing along the Atlantic Ocean seafloor. The rift, called the Romanche Trench, drops down to more than 25,000 feet (7,600 m) deep and has 10 times the flow of the Amazon River coursing through it. [Gallery: Cutest Creatures from Deep Sea Canyons]

Inside the passage, freezing water flowing north from Antarctica mixes with warmer water coursing above. The differences in speed and temperature between the water layers intensify any rises or dips at this underwater boundary, creating the billowing Kelvin-Helmholtz waves. The waves are named for the scientists Lord Kelvin and Hermann von Helmholtz, who discovered the phenomenon.

Kelvin-Helmholtz waves can appear on Earth or other planets, wherever there is a speed difference in a fluid. They appear where the waters of the Mediterranean Sea roll downhill through the Straits of Gibraltar, creating underwater cascades. In the sky, the process forms eerie wavelike clouds. Some of Saturn's spectacular patterns come from crashing Kelvin-Helmholtz waves, according to NASA. The breaking waves even emerge in Earth's magnetic field.

Van Haren and his colleagues detected hundreds of billowing waves below the ocean surface using sensors moored near the Romanche Trench's southwestern end. Here, a chilly river — about 33 degrees Fahrenheit (0.5 degrees Celsius) — flows north into the trench through a narrow gap about 4 miles (7 kilometers) wide in a long, thin ridge. The current is Antarctic Bottom Water, and it travels north across the Atlantic after plunging off the edge of Antarctica.

"There are only three main conduits for Antarctic Bottom Water to cross the equator, and this is one of them," van Haren said.

During one four-day period, the researchers counted an unbroken sequence of some 250 waves at this spot, with the waves varying from between 16 to 328 feet (5 to 100 m) in height, the scientists reported Dec. 9, 2014, in the journal Geophysical Research Letters. Tides also pour through the Romanche Trench. When the tidal flow was directed to the south, opposite the northward Antarctic current, the billowing waves were at their tallest, van Haren noted.

"They are seeing something never quite seen before, as well as seeing it in a very inaccessible place," said Jim McWilliams, an ocean scientist at the University of California, Los Angeles, who was not involved in the study.

The mixing seen in the Romanche Trench also helps warm the Antarctic Bottom Water by about 1.8 degrees F (1 degree C) by the time it leaves the channel, van Haren said. "In the ocean, when you find life, the water must be moving," van Haren said. "What we find is that the tides are important for deep-ocean mixing."

The waves were breaking over a seafloor feature called a sill, a long, thin ridge that partially blocks the main canyon entrance like a dike. The steep topography is critical for generating the waves, van Haren said. As the Antarctic Bottom Current spills over the sill, rushing into the deep canyon, the onrush pushes against warmer Atlantic water flowing southward, and the fierce shoving match sets up Kelvin-Helmholtz waves. [Infographic: Tallest Mountain to Deepest Ocean Trench]

Imagine standing in a mountain valley just after sunset and feeling a rush of cold wind coming downhill, McWilliams said. The Romanche Trench setting is similar, with denser, colder water rushing down its canyon slope.

However, because the mooring was only in one place, the researchers can't say for certain that the billow train was the longest ever seen, countered Ann Gargett, an emeritus professor of physical oceanography at Old Dominion University in Norfolk, Virginia. "Picture 250 waves stretching off down the channel. They don't have the spatial information to say that it was an extremely long train," said Gargett, who was not involved in the study. "If you consider the case of the mountain range, they are actually tied to the mountain range," she told Live Science.

Van Haren did agree with Gargett. "This is the longest train in terms of time, as indeed we measured at a single point," he said. But van Haren argued that persistent current likely carried the unbroken wave train into the canyon, creating a record-long train.