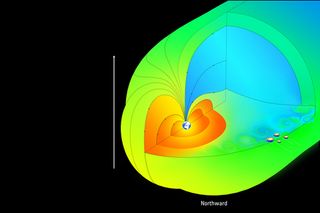 When Earth’s magnetic field and the interplanetary magnetic field are aligned, for example in a northward orientation as indicated by the white arrow in this graphic, Kelvin–Helmholtz waves are generated at low (equatorial) latitudes.
(Image: © AOES Medialab)

Our planet's protective magnetic bubble may not be as protective as scientists had thought. Small breaks in Earth's magnetic field almost continuously let in the solar wind — the stream of magnetic, energized plasma launched by the sun toward the planets — new research has found.

"The solar wind can enter the magnetosphere at different locations and under different magnetic field conditions that we hadn't known about before," Melvyn Goldstein, an astrophysicist at NASA's Goddard Space Flight Center, said in a statement.

Charged particles in the solar wind can interrupt GPS signals and power systems, as well as create dazzling auroras.

The magnetosphere is the planet's first line of defense against the solar wind. Scientists knew that this plasma stream occasionally breached the magnetosphere near the equator, where the Earth's magnetic field is roughly parallel to the magnetic field in the solar wind. The new study, published Aug. 29 in the Journal of Geophysical Research, found that these breaks can happen under a wider range of conditions.

The European Space Agency's Cluster mission, a set of four satellites that fly in close formation through the Earth's magnetic field, gathered the data that show how the solar wind can get through. Equipped with state-of-the-art instruments for measuring electric and magnetic fields, the Cluster satellites fly in and out of the magnetosphere and document the microscopic magnetic interactions between the Earth and the sun.

As Kelvin-Helmholtz waves slide past the magnetopause, they can create giant vortices, similar to how wind blowing across the ocean causes waves. The huge waves can spontaneously break and reconnect magnetic field lines, creating openings that let the solar wind slip through.

'Not a perfect magnetic bubble'

The new findings suggest that these magnetic field line breaks can also occur where the terrestrial and solar wind magnetic fields are perpendicular, at high latitudes near the poles.

"We found that when the [solar wind] magnetic field is westward or eastward, magnetopause boundary layers at higher latitude become most subject to Kelvin-Helmholtz instabilities, regions quite distant from previous observations of these waves," Kyoung-Joo Hwang, a researcher at NASA's Goddard Space Flight Center who led the study, said in a statement.

"In fact, it's very hard to imagine a situation where solar wind plasma could not leak into the magnetosphere, since it is not a perfect magnetic bubble," Hwang said.