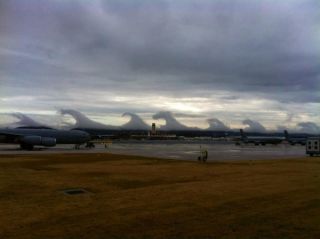 For a morning, the sky looked like a surfer's dream: A series of huge breaking waves lined the horizon in Birmingham, Ala., on Friday (Dec. 16), their crests surging forward in slow motion. Amazed Alabamans took photos of the clouds and sent them to their local weather station, wondering, "What are these tsunamis in the sky?"

Experts say the clouds were pristine examples of "Kelvin-Helmholtz waves." Whether seen in the sky or in the ocean, this type of turbulence always forms when a fast-moving layer of fluid slides on top of a slower, thicker layer, dragging its surface.

Water waves, for example, form when the layer of fluid above them (i.e., the air) is moving faster than the layer of fluid below (i.e., the water). When the difference between the wind and water speed increases to a certain point, the waves "break" — their crests lurch forward — and they take on the telltale Kelvin-Helmholtz shape. [Astonishing Video Shows a Face in the Clouds]

According to Chris Walcek, a meteorologist at the Atmospheric Sciences Research Center at the State University of New York, Albany, fast-moving air high in the sky can drag the top of slow-moving, thick clouds underneath it in much the same way.

Most of the time, the difference in wind speed and temperature between two layers of the atmosphere is small, and so the fast-moving air on top "simply slides smoothly over the slower-moving air like a hockey puck sliding along an ice surface," Walcek said. At the other extreme, if the wind-speed difference is too large, the interface between the two layers breaks down into random turbulence.

Kelvin-Helmholtz waves form when the difference in the temperature and wind speed of the two layers hits a sweet spot. "What [these pictures] show is air between these two atmospheric layers that is just very close to that threshold for turbulence, and mixing to mix the two layers together," he said.