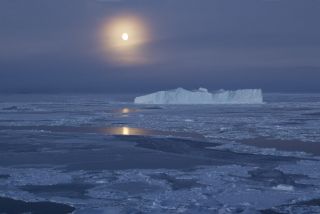 Mountainous terrain buried beneath Drake Passage, the waterway separating South America and Antarctica, may be responsible for much of the ocean mixing in the region.
(Image: © Alan Homer and British Antarctic Survey)

This churning of waters in the Southern Ocean plays a huge role in ocean circulation and, in turn, climate.

"Our study indicates that virtually all the mixing in the Southern Ocean occurs in Drake Passage and at a few other undersea mountain locations," study co-author Andrew Watson, an oceanographer at the University of Exeter in England, said in a statement. "Our study will provide climate scientists with the detailed information about the oceans that they currently lack."

The findings, detailed today (Sept. 18) in the journal Nature, resolve a long-standing mystery about how ocean waters are mixed near Antarctica.

For years, scientists had known that the dense water from the deepest depths of the Southern Ocean near Antarctica had to mix with the lighter water above it. But scientists had no idea what was going on at the middle depths of the ocean. [Infographic: Tallest Mountain to Deepest Ocean Trench]

That was a problem for climate predictions, because the churning of ocean waters can drive long-term climate patterns, said Rick Lumpkin, an oceanographer with the National Oceanic and Atmospheric Administration in Miami, who was not involved in the study. Understanding how this mixing occurs can better inform the climate models that make those predictions, because ocean mixing carries carbon dioxide from the atmosphere into the deep sea. Ocean mixing also affects how heat is transferred to the poles of the Earth, affecting global temperatures.

Oceanographers knew the Andes Mountains once connected South America and Antarctica, before the movement of Earth's continents and changes in sea level flooded the southern tail of the range. Now, some mountains lie buried beneath Drake Passage, the channel that separates the two continents. Some researchers had proposed that the rough topography of those mountains could cause seawater to mix, but they had no way to test that idea. An alternative theory posited that water evaporation caused surface waters to become denser, causing it to sink and drive ocean mixing.

To understand the mixing of ocean waters at middle depths near Antarctica, Watson and his colleagues released a tank of an inert tracer into the Southern Ocean water at various locations in and near Drake Passage.

They then went back over a few years to find the patches of ocean where they left the tracer, and took water samples at many depths to see how the tracer had mixed with the seawater.

"It's an impressive feat to go back and find that again," Lumpkin told LiveScience's OurAmazingPlanet.

The team found that relatively little mixing happened at the middle depths of the ocean outside Drake Passage. But there were a few places where a lot was going on.

"There are these hotspots associated with the topography — mountains — where mixing is a lot, lot higher," Lumpkin said. "As much as 20 or 30 percent of the density change that the water experiences might be happening by interior mixing."

Another recent study, published recently in the journal Geophysical Research Letters, found that huge underwater waves mix enormous amounts of deep water as they break in the narrow Samoan Passage in the South Pacific.