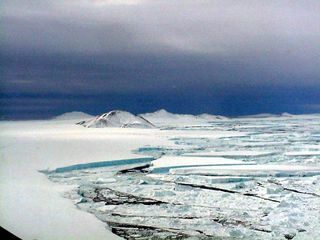 The Pacific and Atlantic oceans were separated by a giant landmass once, but then a chink formed in this supercontinent and their waters intermingled. New fossil dating reveals that this event occurred about 41 million years ago, millions of years earlier than some scientists had estimated.

The southern supercontinent, Gondwana, which once included land from most of the continents in the Southern Hemisphere, started to break up about 160 million years ago due to the same forces that drive plate tectonics.

During this breakup, an oceanic passageway, called the Drake Passage, formed between the Antarctic Peninsula and South America. This opening connects the Pacific and Atlantic oceans and encircles Antarctica in a ring of cool water known as the Antarctic Circumpolar Current (ACC).

The ACC thermally isolated Antarctica from the warmer, lower latitudes. This played an important role in cooling the continent down and developing Antarctic ice sheets about 34 million years ago.

"The Antarctic Circumpolar Current is the largest current in the world," said study team member Howie Scher of University of Rochester.  "Its inception was surely felt worldwide."

However, by examining sediment core from the Atlantic side of the Drake Passage and studying isotopic signatures of neodymium, or Nd, a rare earth element contained in fossilized fish teeth, the researchers were able to come up with a more precise estimate.

"Our results show a major increase in the isotopic composition of Nd around 41 million years ago, " Scher said. "We believe that this corresponds to the early opening of Drake Passage, which allowed Pacific seawater to move into the Atlantic."

This knowledge is important for understanding how the continental ice sheets grew and were sustained.

"Amid growing evidence that the West Antarctic Ice Sheet and the Greenland Ice Sheet are becoming less stable in the face of atmospheric and ocean warming, this research strengthens the argument that ice sheets are stable by a narrow margin that incorporates many different factors including ocean circulation," Scher told LiveScience.

Many scientists have warned that if the ice sheets collapse, sea level around the world could rise.

Scher plans to examine other sediment cores to see how different parts of the ocean responded to these changes, which could help scientists better understand the relationship between ocean circulation and climate changes.

The study, conducted by Scher and Ellen Martin of the University of Florida, is detailed in the April 21 issue of Science.