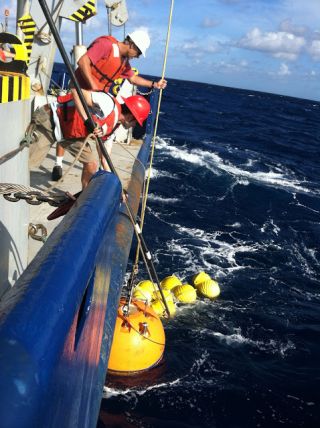 Scientists lower their instruments into the waters of the Samoan Passage to see how huge underwater waves breaking deep below affect the mixing of ocean waters and nutrients.
(Image: © M. Alford et al.)

The chaos from skyscraper-tall waves breaking deep underwater has been captured for the first time, researchers say.

Turbulence from these waves can generate thousands of times more mixing in the deep ocean than previously thought and, in turn, potentially require a critical rethinking of global models of climate and the oceans, the scientists who got a look at the phenomenon added.

Waves on the surface of the ocean generally can only grow up to a few dozen feet tall at most before collapsing, because water is so much heavier than air. However, underwater waves are made of deep, cold, dense water rising into layers of shallower, warmer, lighter water, and therefore, can reach titanic sizes.

(But don't get any ideas, surfers — these waves aren't the kind for hanging ten.

"It would be really boring," said Alford, who is a surfer. "The waves can take an hour to break, and I think most surfers are not going to wait that long for one wave.")

These mammoth "internal waves" are thought to play a crucial role in mixing heat and chemicals across layers of the ocean that ordinarily never mingle — key factors that global models of the ocean and climate need to take into account.

"Climate models are really sensitive not only to how much turbulence there is in the deep ocean, but to where it is," Alford said in a statement.

Relatively little is known about turbulence in the deep ocean. To find out more, Alford led a seven-week expedition in 2012 to the Samoan Passage, a 25-mile (40 kilometers) gap in a huge underwater ridge northeast of Samoa nearly 3 miles (5 km) below the surface of the ocean. A tremendous amount of water tries to flow northward through this channel — 210 million cubic feet (6 million cubic meters) of water per second, equal to the flow of about 35 Amazon rivers.

"This remarkable spot is a really, really important location when it comes to the circulation of water in the ocean," Alford said. "Nearly all of the water moving northward along the seafloor in the entire South Pacific Ocean gets funneled through this incredibly narrow slot in this subsea mountain range. As water gets squeezed through space, the flow accelerates and gets very energetic, generating huge waves."

In the 1990s, a major expedition measured currents through the Samoan Passage. While the scientists then inferred that a lot of mixing must happen there, they lacked the technical means to properly measure it. [Video: Underwater Waves in the Samoan Passage]

Alford and his colleagues found that layers of water flowing over two consecutive ridges form a kind of wave much like that seen when air passes over mountains. These waves become unstable and turbulent, and break.

The investigators used turbulence profilers — torpedo-shaped probes that essentially have needles sticking out from their noses — to measure the level of mixing in the deep ocean. The way that waves deflected those needles revealed how water flowed down below.

Alford and his colleagues found these giant waves do break in the Samoan Passage, generating mixing 1,000 to 10,000 times that of the surrounding slow-moving water.

"Oceanographers used to talk about the so-called 'dark mixing' problem, where they knew that there should be a certain amount of turbulence in the deep ocean, and yet every time they made a measurement, they observed a tenth of that," Alford said. "We found there's loads and loads of turbulence in the Samoan Passage, and detailed measurements show it's due to breaking waves."

The researchers left behind instruments to record long-term measurements. They will set out on another expedition in January 2014 to collect these instruments and map currents flowing through various gaps in the intricate channel.

The Samoan Passage is a key bottleneck for circulation in the world's largest ocean that mixes vast amounts of water, but similar processes happen in other places, Alford said. Better knowledge of deep-ocean mixing could help better simulate global currents.

The scientists detailed their findings online Sept. 3 in the journal Geophysical Research Letters.