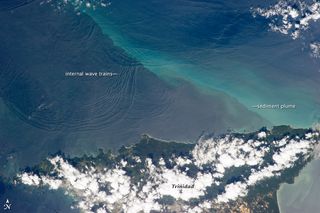 This photograph, taken on Jan. 18 by a crewmember on the International Space Station, shows internal waves north of the Caribbean island of Trinidad.
(Image: © NASA Earth Observatory)

In the ocean, there are more waves than meet the eye.

Below the whitecaps breaking on the sea surface, so-called internal waves ripple through the water. These waves can travel long distances, but rarely does evidence of their existence surface — unless you're looking down from space, that is.

This photograph, taken on Jan. 18 by a crewmember on the International Space Station, shows internal waves north of the Caribbean island of Trinidad, as featured by NASA's Earth Observatory. From space, the appearance of the waves is enhanced due to reflected sunlight, or sunglint, aimed back at the space station, making the waves visible to an astronaut's camera.

Internal waves are seen throughout Earth's oceans and atmosphere, according to MIT's Experimental and Nonlinear Dynamics Lab.  They are created by differences in density of water layers (from changes in temperature or salt content, for example) when that water moves over a feature such as an underwater mountain or a continental shelf. The waves are huge, with heights up to 100 meters (about 330 feet) and widths that span hundreds of miles, according to a 2010 MIT press release on a new method for studying the waves.

A plume of milky sediment can also be seen moving to the northwest in the photograph. The sediment is carried by the equatorial current, which flows from east to west, starting in Africa, and is driven toward the Caribbean by strong easterly winds, according to the website.