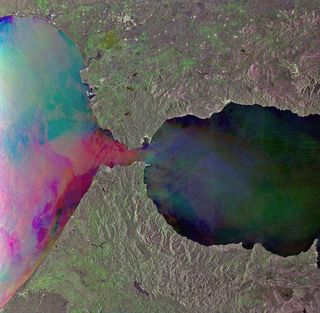 As the Mediterranean Outflow water leaves the sea, it flows over a sudden rise in the sea floor, generating a series of internal waves, which can be seen in this image from radar instruments aboard the European Space Agency's Envisat satellite. The images were taken August 12 2010, October 1 2009 and August 27 2009 over the same area. The colors are the result of changes in the surface between photographs.

Internal waves are not easily visible to observers because they do not cause large waves to appear; instead, they create a horizontal surface current, which affects the roughness of the surface of the sea. From space, internal waves can be detected very efficiently using this radar technique, which is sensitive to changes in the small-scale surface roughness of the ocean.

Internal waves in this image show up as a semi-circular rippled pattern east of the strait's entrance in the Mediterranean Sea. Additional sets of internal waves generated in the Atlantic Ocean are visible as dark pink lines on the western side of the strait.

The strait is the only connection between the Atlantic Ocean and the Mediterranean Sea , and hundreds of vessels pass through it daily, making it one of the busiest shipping routes in the world. The main shipping lanes can be seen through the concentration of ships -colorful points- in distinct channels.

Several cities are visible in Spain (all as patches of light green) in the image, including the British oversees territory of Gibraltar (semi-circle at the entrance to the Strait of Gibraltar), Malaga (on the coast about 62 miles, or 100 kilometers, east of Gibraltar), Granada (northeast of Malaga) and Seville (left of center top).