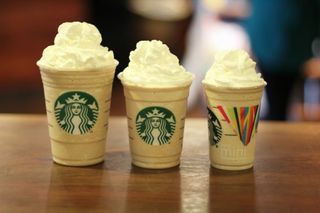 Starbucks is offering a mini size of its Frappuccino drink for a limited time.
(Image: © Starbucks)

The new "mini" size of Starbucks' Frappuccino iced drink is a good idea, but people should still be aware that the sugar-filled beverages are essentially desserts and thus shouldn't be consumed too frequently, experts say.

This week, the popular coffee chain started selling 10-ounce Frappuccinos, which are frozen drinks that usually contain a blend of coffee, ice, milk and syrup, and are sometimes topped with whipped cream. The next-smallest size (which the company calls Tall) is 12 ounces.

"I think it's great news" that Starbucks is offering a smaller size, said Katherine Tallmadge, a registered dietitian and op-ed contributor to Live Science. "It's a good idea for all of the food companies to think about smaller sizes," Tallmadge said.

That's because people tend to eat or drink a whole serving size, even if they don't need the extra calories, she noted.

Dr. Jason Block, an assistant professor of population medicine at Harvard Medical School, agreed that the smaller sizes at Starbucks are good news and appear to be part of a trend of restaurants offering smaller and lower-calorie items.

"I think we're seeing trends right now in the restaurant industry where restaurants are openly trying to compete around the concept of health and lower-calorie," Block said. "I think it's a good sign — it's sort of a reversal of the supersize trends," Block said.

A 2014 study by researchers at Johns Hopkins Bloomberg School of Public Health found that new menu items (introduced the year before the study) tended to have fewer calories than older items.

One reason for the trend could be that consumers are demanding healthier options, Block said. It's also possible that chain restaurants are responding to a new law that will require them to post calorie counts for their menu items, he said.

Even though the mini is a better choice for people already drinking Frappuccinos, "I would never make the argument that it's healthy," Block said. "But it's better, and I think better is a good step."

Block noted that choosing the mini Frappuccino instead of the small would amount to 60 fewer calories a day, which would add up over time.

There are more than 36,000 ways to customize a Frappuccino, Starbucks says, so the number of calories in a drink varies depending on what you order. (For example, a Tall size of the new S'mores Frappuccino has 330 calories and 43 grams of sugar.)

Tallmadge recommends that people think of the mini Frappuccino as a "once a day treat," like a cookie. A cup of milk naturally has 12 grams of sugar, so anything above that means that the beverage likely has added sugar, Tallmadge said. If people have more coffee during the day (on top of their Frappuccino), they should not add sugar, she said.