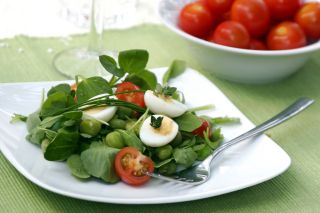 Believing they've had a large meal makes people feel more satisfied and less hungry hours after eating, according to a new study.

Researchers in the United Kingdom showed 100 students either a small 10-ounce serving of cream of tomato soup or a larger 17-ounce serving before lunch. When the students, who had an average age of 26, sat down to eat one of the servings, the researchers secretly changed the actual amount of soup the students ate via a hidden pump. As a result, some students who had been shown a bowl containing 17 ounces of soup actually ate 10 ounces; others who had viewed a bowl containing 10 ounces of tomato soup actually ate 17 ounces.

Immediately after finishing the soup, each student's hunger level was measured. Whether or not a student felt sated depended upon the amount of soup he or she had eaten, not the size of the portion seen. However, two to three hours later, this scenario had changed. Students who had seen the larger portion but really eaten the smaller amount reported being less hungry than students who had originally seen the smaller portion but ate a larger quantity of soup.

The effect persisted 24 hours later when students who had seen the larger portion of soup but eaten the smaller amount said that the lesser amount smaller would have left them satisfied, researchers reported."These data are consistent with the idea that forming a memory for what you have eaten during a meal is important in moderating appetite later on," said study author Jeffrey Brunstrom, professor of experimental psychology at the University of Bristol in the U.K. "Anything that would impair the quality of that memory is probably not a good thing; that includes anything that would distract you." Indeed, people's memories of a meal can affect whether or not their hunger is satisfied, according to previous research. People who don't remember how much they ate because they were distracted as they ate (for example, they watched television), tend to eat more during a meal than those who recall meals, other researchers found.

The current study suggests that not properly remembering a meal can have consequences hours later. "If we don't remember eating, that takes away from our satisfaction level," said Heather Mangieri, a spokesperson for the Academy of Nutrition and Dietetics, who was not involved in the current study. As a result, we may not feel satisfied, which can lead to overeating at the next meal, she said.

The study appears online today (Dec. 5) in the journal PLOS ONE.

Pass it on: The perception of a serving size can affect feelings of fullness hours later.