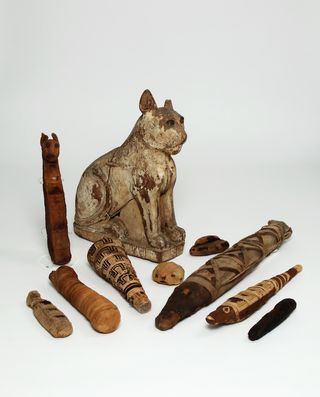 When a team of scientists scanned hundreds of Egyptian animal mummies, the researchers were in for a surprise: Roughly a third of all the mummies contained no body inside.

In the largest project of its kind, researchers used X-rays and CT scans to peer inside more than 300 mummies of animals, including cats, birds and crocodiles, found at several British museums.

A third of the swaddled relics contained complete animal skeletons. Another third of the mummies contained partial remains. The remainder had no bones at all, but instead contained other materials, such as mud, sticks, eggshells and feathers. [See Images of the Egyptian Animal Mummies]

The Egyptians "mummified anything and everything — there are very few animals we don't find," said study researcher Lidija McKnight, an Egyptologist at the University of Manchester in England.

Egypt is known for its human mummies, but animal mummies have received much less study. The Egyptians may have mummified as many as 70 million animals from 800 B.C. into the Roman period (27 B.C. to 476 A.D.), scientists estimate. About 30 Egyptian catacombs containing millions of animal mummies have been found. Each was dedicated to a single animal — a dog, a cat or a monkey, for example.

Human mummies were intended to preserve the body for the afterlife, but animal mummies were created for a variety of other reasons as well. They may have been mummified because they were important animals during their lifetimes. They may have been preserved as household pets buried alongside their owners, as food offerings for humans or as gifts to the gods in return for answers to a prayer. These latter mummies were the kind McKnight and her team studied.

To learn more about animal mummies without harming the remains, the researchers scanned hundreds of mummies in a CT scanner and an X-ray machine, which allowed them to see inside the wrappings without damaging the artifacts. The scans revealed some remarkably well-preserved skeletons, some with partial remains, as well as many that didn't contain anything at all.

The boneless mummies have traditionally been considered fakes or forgeries — "counterfeit goods sold to people to dupe them," McKnight told Live Science. But it's probably more likely that the other materials these mummies contained were just as important as the animal itself, she said. The artifacts were likely in contact with the animals while they were alive, or kept alongside them in sacred spaces.

"We can't say for sure that [forgery] wasn't happening," given that there is very little documentation of the practice, McKnight said. "All we can say is that the Egyptians treated these remains with the same care as the animals themselves."

The findings reveal new insights about the collections that will inform the public about the role that animals played in ancient Egypt, McKnight said. In fact, Manchester Museum plans to open an exhibit on animal mummies in October. The exhibit "will show the general public that these mummies aren't all pets, and have much more to tell us than we might realize," she said.

McKnight and her colleagues have also been creating some mummies of their own, as part of an experimental mummification program. "Our eldest mummy is 3 years old now, and it seems to be doing fine," despite the cold, damp conditions of the lab in Manchester, McKnight said. The animals the researchers use are mostly birds, all of which died naturally, she added.