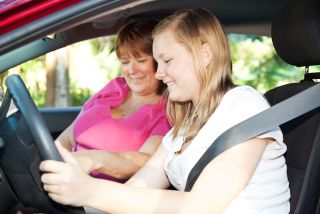 In a bittersweet rite of passage, each year a new crop of parents buckles up for their teens' first time behind the wheel. Now, a new study suggests that their mother's watchful eye helps teens learn to make safer decisions while driving.

In the study, researchers designed a driving simulation test that actually encouraged risk-taking behavior, and asked 25 teens to complete the simulation as quickly as possible. At each of the 26 intersections in the simulation, the teens had the option to stop for a yellow light, which would cause a three-second delay, or speed through the light — which was the fastest option — if they didn't crash. If they did crash, it caused a six-second delay in their total time. The teens went through the course once each on their own, and once under the gaze of mom.

Driving alone, the participants ran through the yellow lights around 55 percent of the time, but when mom was there, that rate dropped to 45 percent. [10 Facts Every Parent Should Know About Their Teen's Brain]

"We think that parents play an important scaffolding role, helping their children to make more thoughtful decisions," said Eva Telzer, a professor of psychology at the University of Illinois and the lead author of the study, which was published April 22 in the journal Social Cognitive and Affective Neuroscience.

As a group, teenagers are the riskiest drivers on the road: Drivers between ages 16 and 19 are about three times more likely than those 20 and older to be in a fatal car crash, in part because these teens are less likely than other adults to wear seat belts, and more likely to speed and underestimate the danger of a situation, according to the Centers for Disease Control and Prevention.

In the new study, the researchers also found that having mom in the car changed teens' brain activity. When the teens were alone, running through a yellow light caused an uptick in blood flow to the brain's reward center, fMRI images showed. But when they were with their mothers, the images showed that the reward center lit up when they made the safer choice, to stop at the light.

In contrast, previous research has shown that driving with peers may have the opposite effect as driving with mom on teens' decisions, and on their brain activity, the researchers said. A 2011 study that used the same driving simulation as the new study found that teens were more likely to make risky driving decisions when their friends were watching, and moreover, the fMRI images showed that the reward centers of teens' brains showed heightened activity during these risky decisions.

The findings suggest that distraction alone can't explain why teen drivers are more reckless when they have friends in the car, the researchers said.

In the new study, the mothers' presence was also linked to increased activity around the area of the brain responsible for impulse control, which wasn't affected when the teens were driving solo.

"Mothers redirected adolescents' sense of reward away from risky choices and towards safe choices," Telzer said. "In other words, it feels good to play it safe when mom is there, whereas it feels good to be risky when alone."

In general, teenagers are less averse to taking risks than adults, in part because the area of the brain responsible for impulse control hasn't fully developed, said Sarah Helfinstein, a researcher at the University of Maryland's Neuroimaging Lab, who was not involved in the new study. But the adolescent brain also craves reward, which may take the form of pleasing whoever's in the passenger seat.