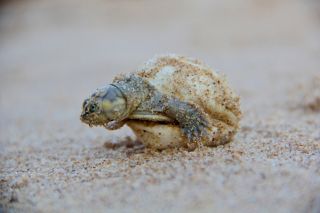 Camila Ferrara is an aquatic turtle specialist with the Brazil Program of the Wildlife Conservation Society (WCS). This article is the second in a series celebrating the contributions of women to the practice of conservation. Ferrara contributed this article to Live Science's Expert Voices: Op-Ed & Insights.

Years ago, in the Brazilian Amazon, I was exposed to a prevalent philosophy for how animals relate to humans, one I did not expect. To the indigenous people I encountered, an animal's primary purpose was to be eaten for food, and many of those people had never considered that such animals could become extinct. That perspective both scared and motivated me.

I made the decision to move to Manaus in the Amazon, and have since devoted myself to working with science colleagues and local communities to conserve wildlife, especially endangered turtles. Since the time of the Portuguese Empire, Amazonian turtles have been an important source of protein in the Amazon, but due to the uncontrolled consumption of their eggs and meat, turtles are now among the most endangered animals  in the region.

In that study, my colleagues and I found that these aquatic turtles use several different kinds of vocal communication. After two years collecting 2,122 vocalizations, I classified 11 categories — all sounds lasting less than one second. [Amazon Turtles 'Talk' to Their Tots ]

We realized the turtles were using the sounds to coordinate social behaviors, such as vocalizations by female turtles calling to newly hatched offspring. Such communication begins as early as the turtles' embryonic stages, about 36 hours before the babies leave their eggs. The study was more than about the sound: This was the first time scientists have identified post-hatchling parental care in turtles.

We also found that hatchlings call to synchronize their births and call their mothers, and adults signal to synchronize their reproductive behavior (to migrate to common nesting and feeding areas). We are developing a growing body of evidence that, for these turtles, sound is essential for exchanging information.

Can river turtles be saved?

These new findings are now supporting and strengthening conservation models for the river turtles, now considered critically endangered by the International Union for Conservation of Nature (IUCN) — these animals face a very high risk of extinction in the wild.

Since 2013, I have worked for WCS Brazil as an aquatic wildlife ecologist, with an emphasis on saving the Podocnemididae family of turtles that I have been studying since my arrival. That family is only native to northern South America, and interestingly, Madagascar, and includes not only the giant South American river turtle and red-headed Amazon river turtle, but also the yellow-spotted Amazon River turtle, the six-tubercled Amazon turtle, and the big-headed sideneck turtle, the most commercialized species in the Amazon.

The Amazon turtles are a major source of protein for the riverine people and indigenous population, but turtle dishes are also very popular in all the cities of the northern part of Brazil. Because of this rampant consumption, especially in big cities, laws prohibit people from eating turtles. But the demand has not ceased. For example, in the small Amazonian city of Tapauá, the population is around 18,000 people, but in one year the turtle consumption was around 26,000 animals.

Early in my work in the Amazon, I had the opportunity to develop a turtle conservation project in the Unini River, a tributary of the Rio Negro in Brazil. The project was funded by the Conservation Leadership Programme, a 30-year-old program targeting conservationists at the early stage of their career who are working to protect species globally. In addition to studying the Rio Negro turtles, I worked with youngsters in the region to teach them about environmental education and the importance of conservation. Five years after completing the project, people still remember and understand the unique role of turtles in their environment.

Through turtle population monitoring, beach management and environmental education work in the Abufari Biological Reserve — located in the Purus River, another tributary of the Amazon — my colleagues and I at WCS are now helping protect the largest turtle reproduction area in the Amazonas state. Incorporating an important waterway connecting the western Amazon to Manaus, the reserve hosts nearly 2,000 nesting females annually, a number that has remained steady in the last few years. [Turtle Aid: Species to Save ]

In several protected areas along the nearby Negro River, monitoring involves local residents — their involvement is essential to conservation. We also work on environmental education and training of young people in these protected areas, building upon local traditions.

Through those efforts, we are trying to better understand turtle populations and how they are changing in response to harvest and management, such as protection of beaches and hatchlings. And through outreach, we are trying to shrink the turtle trade — we work with all ages, teaching the importance of biodiversity.

I'm just beginning my career as a conservationist and scientist, and while it may take years,

one day I hope to see the status of turtle populations in the Amazon tilt from decline to stability, and if we are lucky, expansion. To get there requires more than my work — the next generation of conservationists in the Amazon region will need inspiration, to become more aware of this environment and to have respect for the myriad species here. Without this, conservation cannot continue.

For more from this series on women conservationists, read Will Mobile Labs Finally Halt Killer Frog Fungus? (Op-Ed ). Follow all of the Expert Voices issues and debates — and become part of the discussion — on Facebook, Twitter and Google+. The views expressed are those of the author and do not necessarily reflect the views of the publisher. This version of the article was originally published on Live Science.