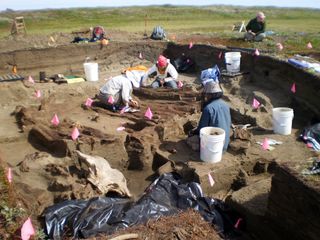 Bronze artifacts discovered in a 1,000-year-old house in Alaska suggest trade was occurring between East Asia and the New World centuries before the voyages of Columbus.

Archaeologists found the artifacts at the "Rising Whale" site at Cape Espenberg.

"When you're looking at the site from a little ways away, it looks like a bowhead [whale] coming to the surface," said Owen Mason, a research associate at the University of Colorado, who is part of a team excavating the site.

The new discoveries, combined with other finds made over the past 100 years, suggest trade items and ideas were reaching Alaska from East Asian civilizations well before Christopher Columbus arrived in the Caribbean Sea in 1492 archaeologists said. [See Images of the New Discoveries at the Rising Whale Site]

"We're seeing the interactions, indirect as they are, with these so-called 'high civilizations' of China, Korea or Yakutia," a region in Russia, Mason said.

Bronze-working had not been developed at this time in Alaska, so archaeologists think the artifacts would have been manufactured in China, Korea or Yakutia, and made their way to Alaska through trade routes.

Also inside that house, researchers found the remains of obsidian artifacts, which have a chemical signature that indicates the obsidian is from the Anadyr River valley in Russia.

The recent discoveries at the Rising Whale site add to over a century of research that indicates trade routes connected the Bering Strait (including the Alaskan side) with the civilizations that flourished in East Asia before Columbus' time. [Top 5 Misconceptions About Columbus]

In 1913, anthropologist Berthold Laufer published an analysis of texts and artifacts in the journal T'oung Pao in which he found that the Chinese had a great interest in obtaining ivory from narwhals and walruses, acquiring it from people who lived to the northeast of China. Some of the walrus ivory may have come from the Bering Strait, where the animals are found in abundance.

Additionally, a number of researchers have noted similarities in design between the plate armor worn by people in Alaska and that worn in China, Korea, Japan and eastern Mongolia.

For instance, in the 1930s, Smithsonian Institution archaeologist Henry Collins undertook excavations at St. Lawrence Island, off the west coast of Alaska. In his book "The Archaeology of St. Lawrence Island" (Smithsonian, 1937), he wrote that plate armor started appearing on the island around 1,000 years ago. It consisted of overlapping plates made of ivory, bones and sometimes iron.

Plate armor similar to this was developed in several areas of East Asia, including Manchuria (in China), eastern Mongolia and Japan, Collins wrote. The use of plate armor, he said, spread north from these areas, and was eventually introduced to Alaska from across the Bering Strait.

Many scientists say that humans first arrived in the New World around 15,000 years ago by crossing a land bridge that had formed across the Bering Strait. This land bridge was flooded about 10,000 years ago.

However, a recent genetic study suggests there were also movements of people from East Asia to the New World at a later date. Those who lived at the Rising Whale site may be part of what scientists refer to as the "Birnirk" culture, a group of people who lived on both sides of the Bering Strait and used sophisticated skin boats and harpoons to hunt whales.

The genetic study indicates that people from the Birnirk culture are the ancestors of a people called the "Thule," who spread out across the North American arctic as far as Greenland. The Thule, in turn, are ancestors of the modern-day Inuit.

The Bering Strait wasn't the only area where interactions between people from the Old World and New World occurred before Columbus' arrival. By 1,000 years ago, the Vikings had explored parts of Canada and had even established a short-lived settlement at L'Anse aux Meadows in Newfoundland.

Research also indicates that, around this time, the Polynesians had reached South America, bringing sweet potatoes back to Polynesia and possibly bringing chickens to South America.

Many other hypotheses have been put forward suggesting that people reached the New World before Columbus. One idea that has received a lot of attention in popular media is that Chinese mariners sailed directly to the New World, although this idea lacks scholarly support.

Mason and his team will present their research on the Rising Whale site at the Canadian Archaeological Association annual meeting in St. John's Newfoundland, Canada, between April 28 and May 2.