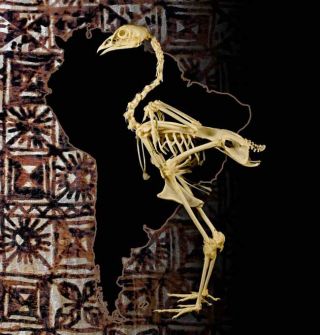 Which came first–the chicken or the European? Popular history, and a familiar rhyme about Christopher Columbus, holds that Europeans made contact with the Americas in 1492, with some arguing that the explorer and his crew were the first outsiders to reach the New World. But chicken bones recently unearthed on the coast of Chile—dating prior to Columbus’ “discovery” of America and resembling the DNA of a fowl species native to Polynesia—may challenge that notion, researchers say. “Chickens could not have gotten to South America on their own—they had to be taken by humans,” said anthropologist Lisa Matisoo-Smith from the University of Auckland, New Zealand. Polynesians made contact with the west coast of South America as much as a century before any Spanish conquistadors, her findings imply. DNA in bone The chicken bones were discovered at an archaeological site called El Arenal, on the south coast of Chile, alongside other materials belonging to the indigenous population. While chickens aren’t native to the region, it was believed the local Araucana species found there now was brought to the Americas by Spanish settlers around 1500. Tests on the bones, however, now indicate the birds arrived well before any European made landfall in South America, Matisoo-Smith and her colleague Alice Storey found. “We had the chicken bone directly dated by radio carbon. The calibrated date was clearly prior to 1492,” Matisoo-Smith told LiveScience, noting that it could have ranged anywhere from 1304 to 1424. “This also fits with the other dates obtained from the site (on other materials), and it fits with the cultural period of the site.” Did Polynesians continue eastwards? DNA extracted from the bones also matched closely with a Polynesian breed of chicken, rather than any chickens found in Europe. Polynesia was settled by sailors who migrated from mainland Southeast Asia, beginning about 3,000 years ago. They continued gradually eastwards, but were never thought to have journeyed further than Easter Island, about 2,000 miles off the coast of continental Chile. The chicken DNA suggests at least one group did make the harrowing journey across the remaining stretch of Pacific, Matisoo-Smith said. “We cannot say exactly which island the voyage came from. The DNA sequence is found in chickens from Tonga, Samoa, Niue, Easter Island and Hawaii,” Matisoo-Smith said. “If we had to guess, we would say it was unlikely to have come from West Polynesia and most likely to have come from Easter Island or some other East Polynesian source that we have not yet sampled.” The results are detailed in the latest issue of the journal Proceedings of the National Academy of Sciences. Kon-Tiki trip in reverse It might be the most tangible, but this isn’t the first evidence that pre-Columbian voyages from the Pacific to South America were possible. In 1947, Thor Heyerdahl, the famous Norwegian anthropologist, made the voyage from Peru to Polynesia aboard his Kon-Tiki raft to prove the trip was doable with a rudimentary vessel. There are more scientific arguments, too, said Matisoo-Smith. “There is increasing evidence of multiple contacts with the Americas,” she said, “based on linguistic evidence and similarities in fish hook styles.” Physical evidence of human DNA from Polynesia has yet to be found in South America, she added.