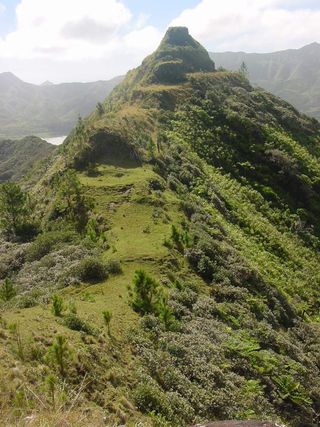 A tiny island in the middle of nowhere is like a world in miniature, a new study finds.

Rapa island lies isolated in the South Pacific, halfway between South America and New Zealand. Initially cooperative, its first settlers turned to violence when faced with the same pressures of environment and competition happening right now across the globe, the research suggests.

"Rapa is a very remote place, like another planet. When settlers arrived there, there was an immediate impact on the environment," said study leader Douglas Kennett. "With populations expanding, you can see the same thing on a larger scale today. It leads to social strife."

Peace at first, then conflict

The first people to live on Rapa arrived via canoe in AD 1200, according to radiocarbon dating conducted at various sites. They initially set up camp in rock shelters along the coast and probably got along well with each other, said Kennett, an archaeologist at the University of Oregon.

"Rapa becomes hyper-fortified about 300 years later," Kennett told LiveScience. "The island is 530 kilometers [more than 300 miles] from its closest neighbor; those fortifications weren't for outside invaders."

Environmental degradation and competition for resources led the people of Rapa to split into warring factions, Kennett argues in his research, which appeared in a recent issue of the journal Antiquity.

Nowhere else to go

When the Polynesians arrived in Rapa, "there was massive erosion, clearing of the land…that had an impact," he said. "People also brought things with them, like different crops and rats, as well as their main staple of taro."

The date the settlers arrived is actually much later than what was previously assumed, Kennett said, meaning that their seafaring ancestors had hung up their long-distance canoe paddles for about 1,500 years after settling westerly islands like Fiji and Tonga.

"We see the same thing happen on those islands, but to a lesser degree," Kennett said. "There were enough small outposts concentrated in the immediate area that people could move on," rather than duke it out for resources. They finally traveled to Rapa—which they may have known about from reconnaissance or trade journeys—only when the other islands were exhausted, he believes.

The resource-depletion had a greater effect on the people of Rapa, which numbered about 2,000 at the time, because they were all forced to stay put, he said. "There was just nowhere else to go—this was the end of the line."

Rapa's history is a lesson that is applicable even in today's world, Kennett says.

There are more and more modern examples of population expansion causing environmental problems, experts say, and not just in the Third World. Parts of California, Arizona and the northeastern United States are experiencing severe water shortages that can only get worse, said popular UCLA geographer Jared Diamond, writing in a 2003 issue of Harper's.

And we can't rely on technology to prevent an eventual social collapse, according to Diamond.

"These particular environmental problems, and many others, are enormously expensive in terms of resources lost, cleanup and restoration costs, and the cost of finding substitutes for lost resources: a billion dollars here, 10 billion there, in dozens and dozens of cases," he said. "Even the mildest of bad scenarios for our future include a gradual economic decline, as happened to the Roman and British empires."