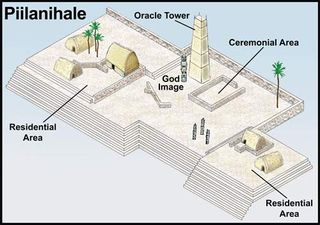 A reconstruction of the mammoth Piâ€™ilanihale complex. NIU Illustration by Neil Colwell

They also spent more time building them, renovating and constructing new temples in waves depending on the island's political situation.

"This research provides conclusive evidence that the Maui temple network grew and expanded over a period at least five centuries," said Michael Kolb, an anthropologist at Northern Illinois University and author of the study. "It's clear that the temple system evolved as part of a long trajectory of social and political change that also saw a shift from ancestral to sacrificial worship."

Kolb spent more than a decade on the island of Maui gathering samples from the ruins of 40 separate temples, which Hawaiians call heiau. Because the land under each temple was scorched to make way for building, Kolb was able to use radiocarbon dating to assert that the first stones were laid on the earliest around the beginning of the 13th century.

Previous research using fewer samples dated the first temples no earlier than 1600 A.D. Anthropologists in the past have had a hard time gathering as much data as he did because of the temples' sacred quality and the fact that many are still in use today, Kolb said.

The results of his study will be published in an upcoming issue of the journal Current Anthropology.

Four peaks in temple construction seem to coincide with tumultuous periods of social and political change in the Kingdom of Maui, according to known oral histories.

"Most of the building happens during formative phases, when you're beginning to see the emergence of states," Kolb told LiveScience. "They relied on monumental architecture to consolidate rulership and as a show of force towards enemies." Similar patterns of construction linked to economic and political shifts are visible in Egypt and other ancient civilizations like the Maya, he noted.

The largest and most elaborate temples on Maui were adorned with towers, pits and sacrificial altars for making offerings to the Hawaiian gods of war. Many were built into cliff-sides and one, the mammoth Pi'ilanihale complex, covered an area larger than a football field.

These sophisticated buildings also marked a significant change in the religious life of Maui's ancient people, according to Kolb.

"The early monuments were typically open-aired temples for community ancestral worship," he said. "Many of the early structures were modified or new ones were built with enclosures on top. Access was limited to reward loyal constituents, and sacrificial worship became more of the focus."

The Hawaiian Islands have been occupied since about 300 A.D., when Polynesian settlers made their way over in large voyaging canoes. In 1778, famous British explorer Captain James Cook was the first westerner to make contact with the islanders.